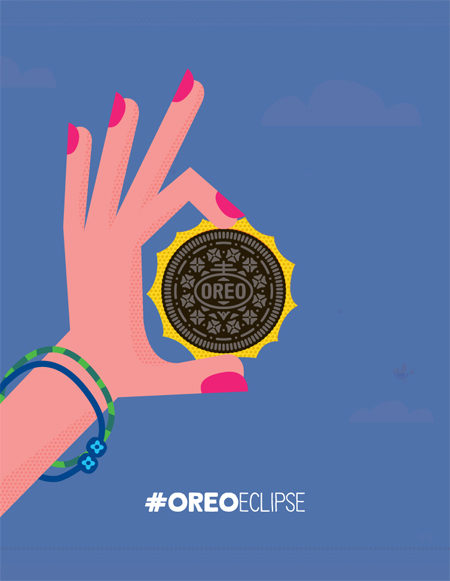 I was commissioned by FCB Inferno in London to work on a tactical campaign for Oreo. I produced illustrations for two full page adverts which ran for one day only in The Sun Newspaper.

The campaign coincided with the 20 March Solar 2015 Eclipse which occurred across Northern Europe that morning.
The way the adverts worked, the newsprint page had a transparent overlay, with the Oreo biscuit representing the Moon which blocked out the sun. The combination of the two pages created the effect of an eclipse. Turing the transparent page revealed the sun underneath.

Time was short, the illustrations had to be completed within a day to allow for test prints. Achieving the desired colour balance on the transparent paper, to create the dark effect of the eclipse. It was a great project to work on with Diogo Tovar Art Director, Gary Robinson Executive Creative Director and Cathy Buchanan Head of Project Management at FCB Inferno.

London based illustrator Freddy Boo produces vibrant graphic illustrations, combining lively figures with simple shapes and patterns composed in bold compositions or humorous detail. He currently illustrates a regular column for the National Geographic Traveller UK magazine. Freddy's work has been recognised by the Association of Illustrators Images 35 Best of British Illustration, 3x3 Int'l ProShow No. 7 & 10, American Illustration 32 and The Serco Prize for Illustration exhibition 2011, 2012 at the London Transport Museum.