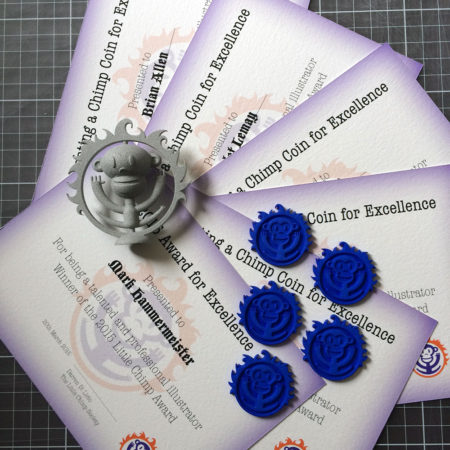 We’ve very happy to announce Mark Hammermeister is the winner of the 2015 Little Chimp Award! It was a very close call and Violet and Brian were just pipped to the post. All of the artists who were shortlisted for the award actually deserved to win, which is why they’ll all be getting Chimp Coins. But in the words of Connor MacLeod “There can be only one” and the 2015 award goes to Mark Hammermeister.

There were numerous reasons and factors for everyone making it onto the shortlist and being picked as the overall winner this time round. Marc Scheff is doing amazing things for the illustration community as a whole, and he’s not afraid to get his kit off for a good cause, or any cause for that matter. Violet Lemay is always educating the masses, but that doesn’t stop her from doing fantastic work with duopress. Brian Allen has had astronomical growth as an illustrator over the last year and he looks set to carry on with same projection for years to come. Paul Shipper’s work has always been outstanding, but recently with his film work he’s really come into his own. And last, but not least Michael Hacker grew a moustache… along with not pulling any punches with his daring and sometimes outrageous artwork.

Mark’s open opinion and his political caricatures along with his work seeming to reflect the public consensus with eerie accuracy was the reason he won the inaugural Little Chimp Award. Even something as relatively small as capturing Chris Evans’ likeness as Captain America helped show us he was the one we should chose as the 2015 king of the pencil pushers.

All six artists including the winner are also part of the Showcase 100 exhibition in April. Please join us, you can sign up for the event on Facebook or visit sc100.co.uk for more information. Good company and free drinks!