An LCS interview with Paul Kidby 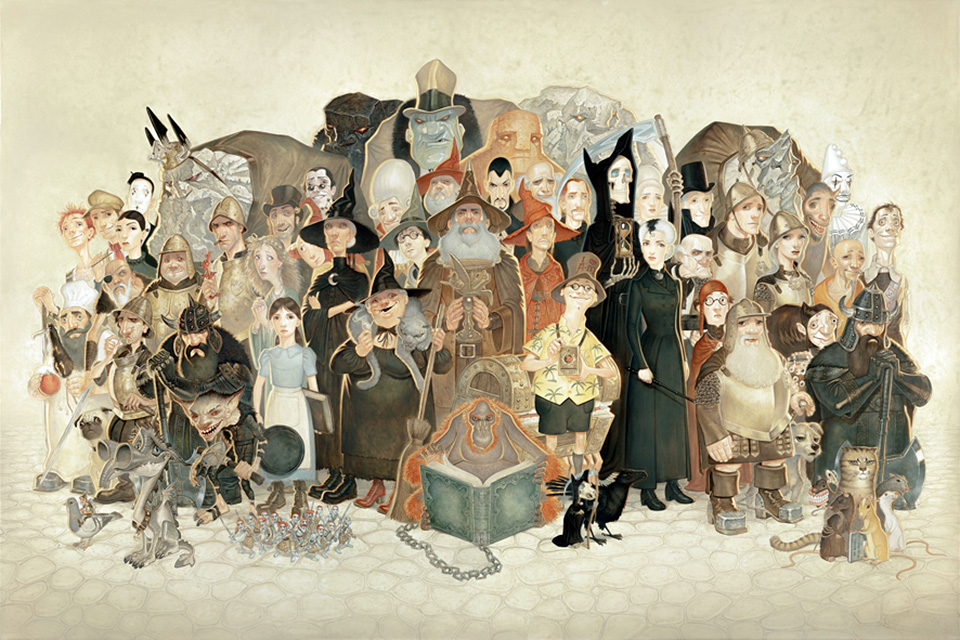 Darren Di Lieto: I would like to welcome illustrator and artist Paul Kidby to the LCS. Paul Kidby (not to be confused with Josh Kirby) is a London born world renowned self-taught artist who became a freelance illustrator in 1986. He’s best known for his work on the ‘Discworld’ book jackets for Sir Terry Pratchett and has been designing them since 2002. You may have seen some of his Ook-tastic work recently if you followed the ‘Books about Town’ Riverside Trail in London in 2014. Paul is also a talented sculptor who produces beautiful and collectable bronze sculptures. 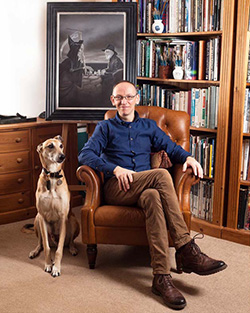 When you first approached Sir Terry Pratchett with the desire to officially create artwork based on his creations he turned you away. Can you remember the reason why? Did he even give a reason?

Paul Kidby: When I first approached Terry with my artwork in 1993 via the editor of SFX magazine (who I was creating covers for) the drawings I presented were generic fantasy and not specific Discworld illustrations. Terry politely said he liked them but I could see that to him they had no relevance, he already had an artist for his covers, (the late Josh Kirby) and wasn’t actively looking for another illustrator. I therefore decided to give it another shot with Discworld specific designs which I gave copies of to Terry at a book signing a few months later.

Darren: You mentioned SFX magazine and I know you worked for Future Publishing. Do you still get asked to create editorial work?

Paul: I very rarely do editorial work these days, the last artwork specifically created for press was Discworld images for Waterstone’s Magazine.

Darren: If you don’t mind me saying, your bronze sculptures are gorgeous. How did you get into sculpting and was there a lot of trial and error when you first started? 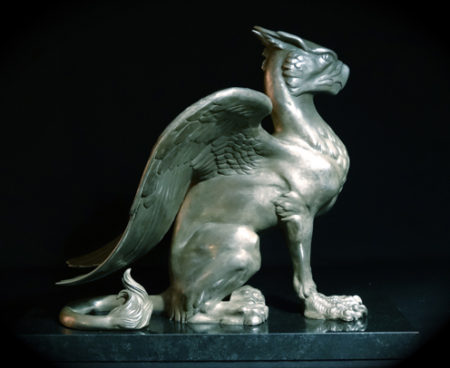 Silver Nemesis II. Bronze on granite base. Edition of 12.

Paul: Thank you! As a child I was always making Orks and stuff out of plasticise and getting told off for getting bits stuck in the carpet by my mum! I learned how to sculpt properly with tools back in my late teens when I worked in a dental lab making false teeth. It was the most creative job I could find at the time. I never see those early years as wasted because I developed skills I still use today and I also still work with dental tools when I sculpt. The nice thing about sculpting in a soft medium such as clay or oil-based clay is that you can put bits back on if you make a mistake – I think working in stone or wood would be much harder! I enjoy working in 3D it makes a nice change but, like my paintings, each sculpt takes me a long time to create.

Darren: With regards to editorial work, do people just not ask or is it the case that editorial work doesn’t pay enough these days?

Paul: I kind of moved away from editorial when I started working on the Discworld series in 1993 as there was plenty in Terry’s writing to keep me busy. Since then I have either been mostly illustrating Discworld or working on self-initiated projects such as The Charmed Realm, a book I created with my wife Vanessa. I found there is more creative freedom in book publishing; the magazine world had very specific requirements for the artwork and short turn around times which can be less satisfying as an artist. I would always rather draw a character of my own design rather than reproduce an existing character, such as Batman for example, which was often the requirement in editorial. 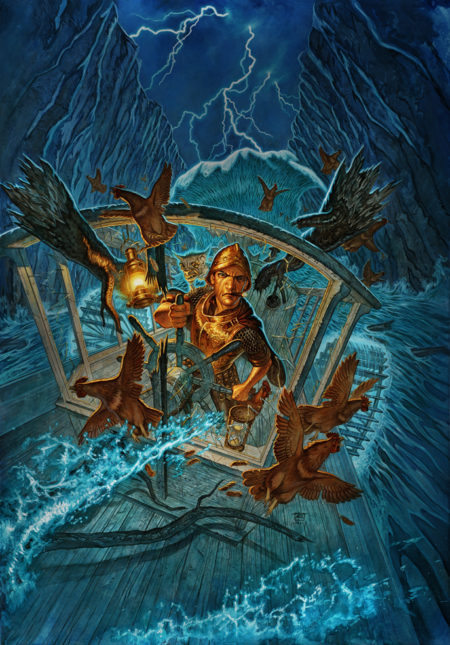 Painted for the book jacket of ‘Snuff’. Discworld novel 39.

Darren: How does the licensing with the Discworld jobs generally work? Also if you’re not commissioned to create an Ankh-Morpork related piece, but you create one anyway… would it be considered fan art?

Paul: Anyone who wants to produce any Discworld merchandise must have a license agreement and contracts drawn up with Terry’s management. I don’t personally own a license to create any Discworld Merchandise with the exception of an agreement to produce my latest painting, ‘Discworld Massif’ as a limited edition print. I don’t generally create any Discworld art unless it is specifically commissioned by the publishers. ‘Discworld Massif’ was commissioned by my Paris Gallery, Daniel Maghen, so I guess I would not classify that as fan art. Creating Discworld art for non-profit and sheer pleasure would be fan art – but I have a mortgage to pay! As copyright owner of the artwork I sometimes have agreements with companies to use my illustrations as long as they have sought all the correct permissions from Terry’s agents. 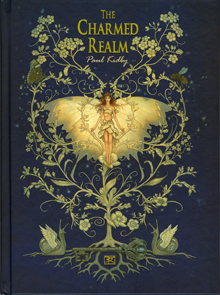 Darren: Since you mentioned your 2013 book The Charmed Realm, what I would like to know is what is the working relationship between you and Vanessa and are you planning more collaborations?

Paul: Vanessa and I have worked together for the past ten years. When we are not creating projects she also runs the business and helps to keep things organised. My studio was terribly messy before she sorted it out and I had developed a reputation for missing deadlines (very much a thing of the past now). I enjoy having company in the work place as my profession can be a solitary one and our dogs help to keep things lively too. Vanessa and I discuss ideas, designs and colours and she does the scanning and any digital stuff. She is a qualified art teacher and has a broad knowledge of the arts world; she can spell too which is useful!

We enjoyed working together on The Charmed Realm and are currently working on a new book project with a third team member. The text is done so it’s down to me to get the artwork ready now.

Darren: Have you ever tried working purely digitally? What I mean is with a touch screen and stylus or even with 3D software?

Paul: I don’t feel much inclined to work digitally, it has taken me so long to master traditional techniques that I am loathe to give them up. I also like to exhibit my work and have a collector base for the originals. It’s nice to have an object to show after all the hours it takes me to create, rather than a digital file. I do use computers to scan and tweak my stuff (tint or adjust contrasts etc) and send files electronically which is a nice way to make sure the original work doesn’t go astray so I am glad to have a computer but I just don’t want to actually move my working processes across to it. 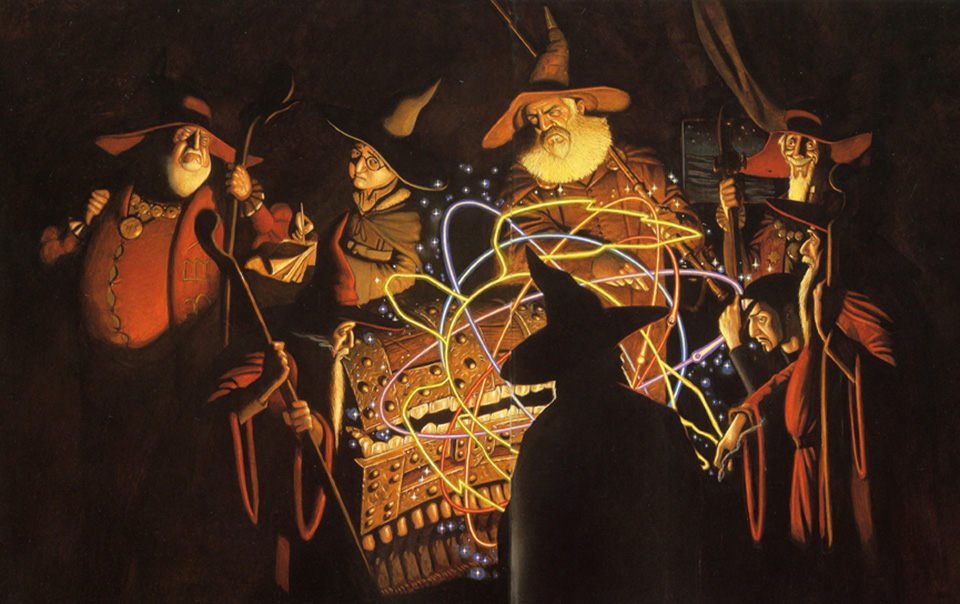 Darren: Are we ever going to see any of your work animated? Is this something you’d like to see?

Paul: It would be fun to see my Charmed Realm artwork animated. If my Discworld art were to be animated I think it would be a complex area with copyrights etc. There are currently no plans afoot to animate my work. 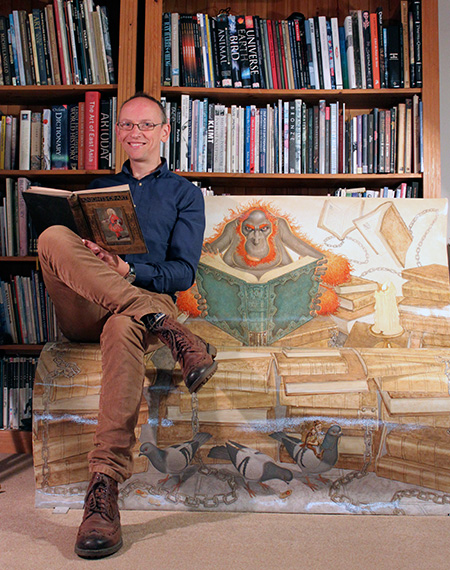 Darren: Do you attend many conventions and how do you feel about them?

Paul: I don’t really attend conventions. I went to some Discworld ones back in the early days and I have done Art in Action (a four day arts festival near Oxford), but I am usually busy in the studio and prefer to keep a back seat in the public domain and let my artwork go out into the world and do the talking for me.

Darren: Do you have an agent, if so what’s your working relationship like?

Paul: I do have an agent, in fact I have two! An agent for all things Discworld and also a literary agent for other projects, namely an upcoming book that I have been working on with my wife and a fellow writer for the past nine years! I also have dealers for the original artwork based in Paris, Salisbury and my hometown of Fordingbridge.

My relationship with all my agents is amenable and professional. I don’t really do office parties or enter into any publishing politics so life is kept simple in that respect. I trust my agents to do their best for me and leave them alone to get on with things.

Darren: What piece of work are you most proud of?

Paul: I am proud of my complete Discworld back catalogue and the fact that I have fairly comprehensively illustrated many of the characters and environments. It is a sizeable collection and I am pleased that a selection of the work is now on show in the travelling ‘Discworld and Beyond’ exhibition. This year the work will be shown in Newcastle under Lyme, Gosport and Luton. Exhibiting the originals and seeing the body of work brought together is something I have felt proud to have the opportunity to do these past years. It’s nice to look back at the work I have produced and see it displayed in a gallery space (far better than it being in store).

Darren: I noticed you’re two for two with book jackets for Charlotte Haptie and Tom Holt. Is there another fantasy franchise you’d like to see your work associated with other than the Discworld series (or are you just looking to be seen as an artist in your own right)? 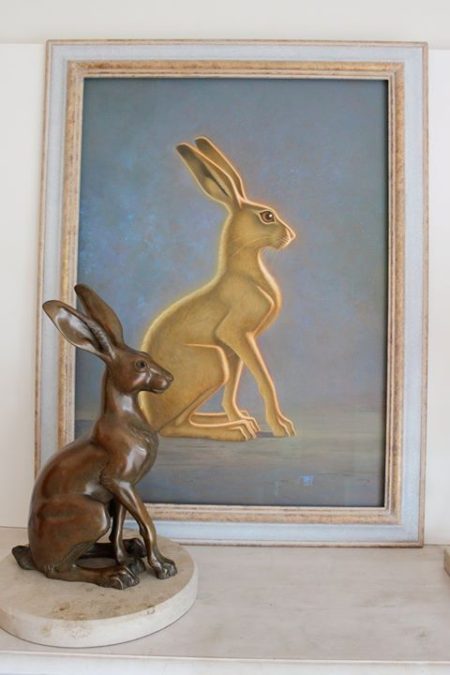 Paul: I definitely prefer to be considered an artist in my own right and not just an illustrator but a sculptor and painter too; but I also am a working illustrator and therefore take all sorts of commissions. I am currently working on a title by the American writer Bruce Coville, ‘The Diary of a Mad Brownie’ which will be published this autumn. I have always liked the thought of illustrating the humorous Hitch-Hikers Guide to the Galaxy by Douglas Adams so that would be the other fantasy franchise I would pick given the choice! 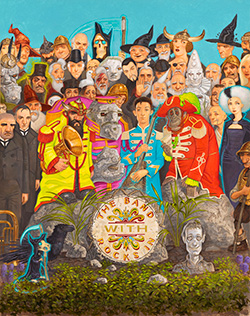 Paul: I don’t have a singular favourite Discworld character but I do especially like Granny Weatherwax (she reminds me bit of my stern Welsh mum), Vimes because he is deep thinking and complex, The Nacmac Feegles because they are so fun and Death because it’s a challenge to work against centuries of established iconography and render him as kindly.

Darren: What do you do when you’re not working?

Paul: When I am not working I am most often found out walking with the dogs. Vanessa & I share a strong topophilia for the New Forest; the wide skies, lonely moors and ancient woods inspire me. Walking is healthful especially for someone who is sat still as much as I am and I have to look after my back which has been known to cause me problems, to this end I also do Pilates once a week which has helped hugely. We garden too – we made an abundant veggie patch in our last house but we have recently moved so the challenge is to make another one. You might also find me watching a movie with a glass of red wine. 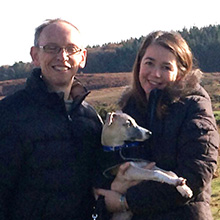 Darren: Who gets more cuddles, Felicific Rainbow or Vanessa?

Paul: The puppy is adorable and very cuddly but she also does a lot of play-biting and has some very dubious personal habits, I therefore prefer to cuddle Vanessa, which is how it should be I think.

Paul: Ook indeed, the omphalos of my work is Ook.

Darren: Thank you for the time you’ve given us and for being a good sport!

That’s the end of the interview. 🙂

You can see more of Paul Kidby’s fantastic work at paulkidby.net 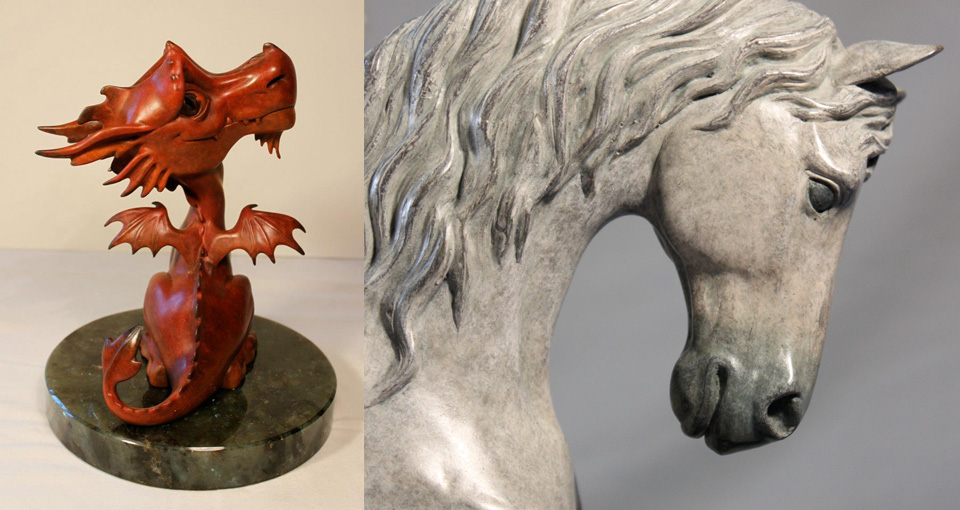 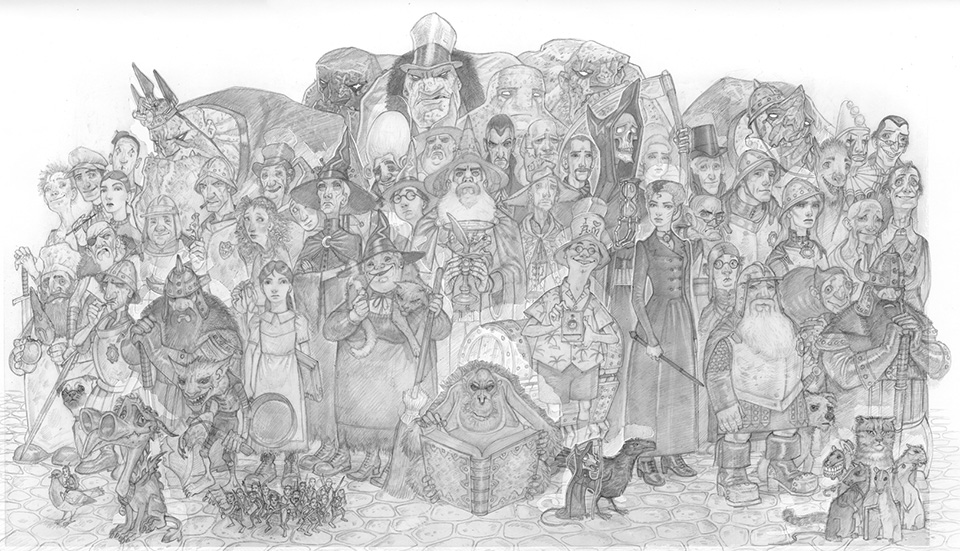 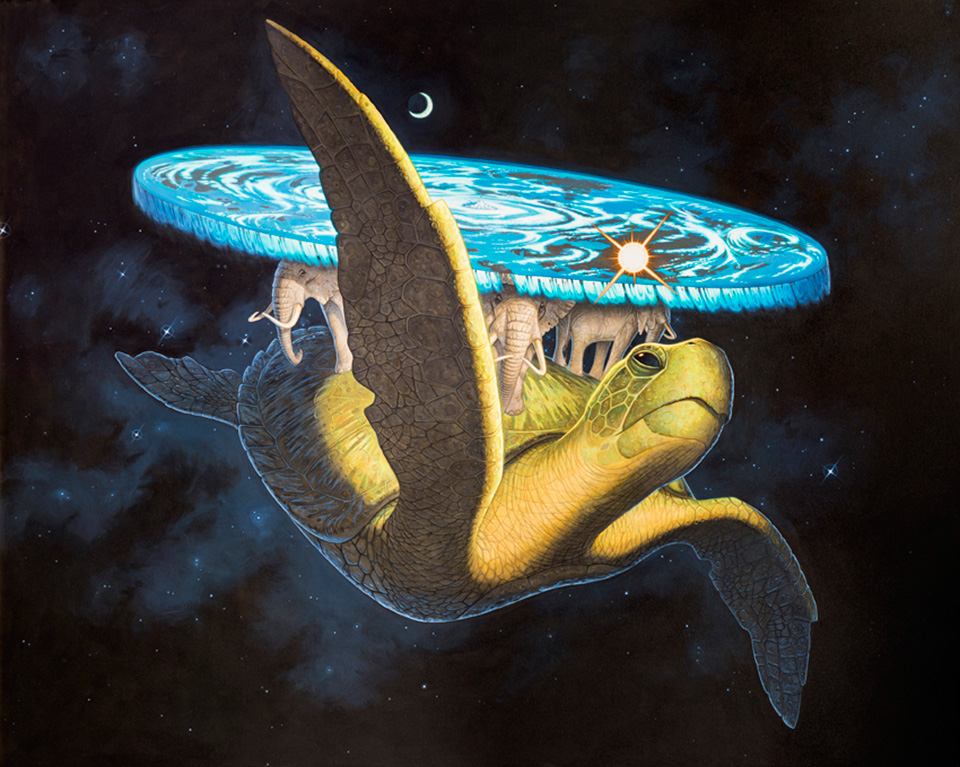 All work included in the Paul Kidby LCS interview is copyright Paul Kidby or the respective 3rd parties.