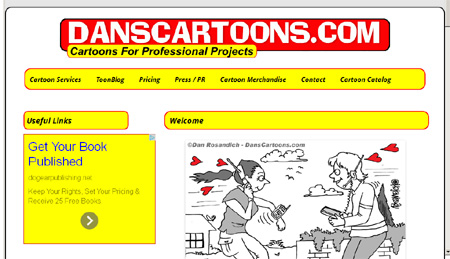 Cartoonist and humorous illustrator Dan Rosandich has finished rebuilding his entire online cartoon catalog after 13 months and the new site has many improvements including a blog called ToonBlog that will act as the nerve-center and will showcase new projects and cartoons including profiling cartoon related news. The site also has a built in search engine and a new image gallery layout and functionality which will offer professionals easier and faster ways of locating the right cartoon. Aside from these aspects is a subscription form allowing followers to subscribe to the ToonBlog via email and the daily auto-updating web cartoon is higher up the page and above-the-fold which allows for quicker access to Dan’s daily web comic.

The site is chock full of cartoons that are catalogued by keyword and subject matter and presented on separate pages of their own, not to mention in key worded image galleries. This makes for over 9,875 separate pages throughout the site, along with more pages planned to be added via the ToonBlog. For anyone interested in cartoons and cartooning in general, feel free to visit and bookmark Dan’s Cartoons for future reference or just your daily laugh-fix.

Have over 32 years of experience as a fulltime cartoonist and humorous illustrator. Began primarily as a gag cartoonist and have had single panel cartoonjs appear in Saturday Evening Post, Good Housekeeping, Better Homes & gardens, National Enquirer, Saturday Review plus a wide array of trade journals, newsletters and regional magazines. Have also illustrated advertising images, package design and cartoons for apparel. Also maintain my own image licensing database and offer my cartoons for reprint to interested potential clientele.