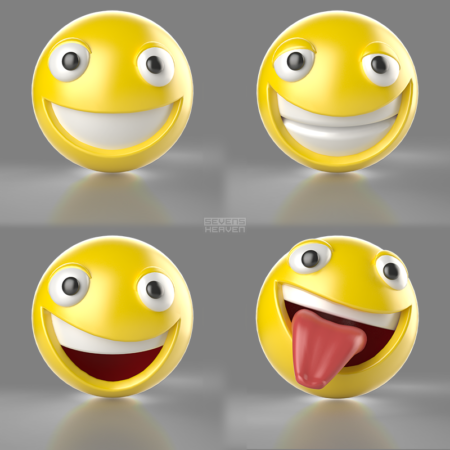 In 2006 I designed a series of 3D smiley characters for an advertising agency.

After publishing the smileys on http://sevensheaven.nl I saw them hundreds of times in forums, as avatars, in blog posts, etcetera.

In 2009 an exact copy of one of the smileys was used without authorization for a campaign by the Dutch Veronica TV channel. My agent approached them, and after some initial defense by the company’s lawyers they paid for a rightful license.

In 2011 an orange-colored variant of the smiley with its tongue sticking out was licensed to the Canadian amusement park Funhaven.

Metin Seven — Dutch designer and visual artist. Creates and sells 3D prints and art prints — www.metinseven.com — Background • Post-2000 Daily cartoonist for Nu.nl, Holland's largest news site. Illustrator for various printed commercial magazines and newspapers, including Esquire, SQ Magazine, Elsevier weekblad, NRC.next, De Volkskrant and Emerce. Creator of the Seamour Sheep characters, comics and toys. Author of articles and reviews for various commercial publications, including PC-Active magazine, PC Magazine, iPhoneclub.nl and iPadclub.nl. Creator of artwork ordered by Google's Calfornia head office and hung as a large-sized framed print in a hallway of the Android Building. Third prize winner at the yearly international Animago computer graphics awards, 2004. 1125 creatives from around 50 countries participated in the competition. • Pre-2000 Born in Brussels, Belgium. Raised in the Netherlands during the dawn of the digital revolution, spoon-fed with computer audiovisuals (Atari, Commodore), roaming the internet since early 1993. Member of the Digital Force International (DFI), a Commodore Amiga computer scene group that became well-known for a range of a capella rap songs. Professional software designer and graphic artist for a range of computers, starting with the Commodore Amiga. Game productions include Hoi, Clockwiser and Moon Child, and the music editors SIDmon and Digital Mugician, published worldwide on physical media in the 1990s. Publishers included Thalamus, famous for game hits such as Armalyte, Creatures, Delta, Hawkeye, Quedex and Sanxion. Co-creator of two VPRO television animation series: Mannetje & Mannetje and Tattletoons. Mannetje & Mannetje footage has been used in media education as one of the very first completely computer-animated television series, and earned a place in the Dutch national broadcast museum. Tattletoons was the world's first interactive animation production, was featured in the March 2001 issue of Time magazine, and won an EMMA television and multimedia award at the MIPTV/MILIA festival in Cannes. Co-creator of the first custom-made computer game to appear in a (Dutch) television commercial, for Calve peanut-butter, in 1992. It was also the first Dutch commercial with a length of one minute. After the commercial aired on television, the Calve Peanut-Butter Power Game was played by kids in the popular RTL 4 children's matinee Telekids, where they could win their length in stacked peanut-butter jars. • Publicity https://plus.google.com/photos/+SevensheavenNL/albums/5811334665737517649?sort=1