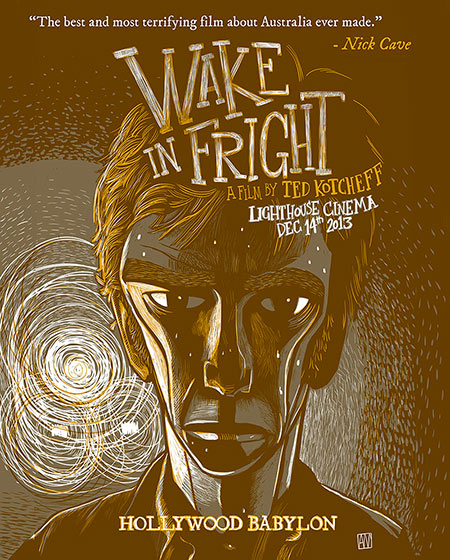 A while back I was asked by the guys in Hollywood Babylon (Dublin) to come up with a screenprint design for the screening they are doing of Wake In Fright, an Australian cult movie. I hadn’t heard of the film before so first thing was getting to watch it. It is an amazing film.

There were loads of memorable scenes and visual queues you could latch to. Most existing posters focus on the scorching sunlight of the desert. For me, it was far more striking this scene where he finally “turns into the darkside”.

Anyway, once the image was clear in my head, I did a couple of sketches to nail the composition and then I set off creating the two plates, as individual black and white files, that make up this digicut.

When I set off in search of my style, I ended up working in two main directions: The first one has to do with the creative aspect of illustration. After trying to emulate different people based on the appeal they had to me or their success, I finally found a visual language that I can honestly say is my own way of seeing things. The second direction has to do with the actual process of producing the image. Traditional relief printing gave me the key to make sense of what I was doing digitally. To the point that they've become almost interchangeable. It was in an interview to Zina Saunders that I heard for the first time "Digicut" referred to her digital woodcut work. I immediately adopted the term to describe mine. I am a member of Illustrators Ireland and The Association of Illustrators