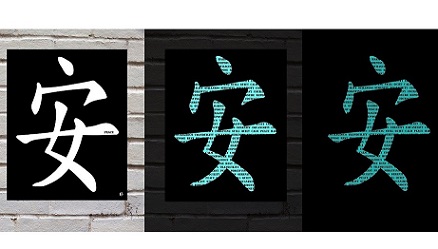 A new Kickstarter project called Text Message, originally created by an architectural designer Fanny Chu, will definitely blow your mind and changes your view about poster. It is a dynamic art piece that glows in the dark naturally. Not only it is one of the most creative piece, but also sustainably made with silkscreen-printing by hands.

The concept of this project was mentioned by Chu, “…is to create powerful message by the art itself. I believe each character/text/word had more than one meaning. We may interpret each differently, but those meanings or messages count and make up the text itself.” There are eight design variation: each with one Chinese character. Although it may appear classy with a touch of modern under the light; in the dark, Text Message completely fascinates audience with glowing message that only reveal in the dark.