Breaking Bad and Breaking into Oakland 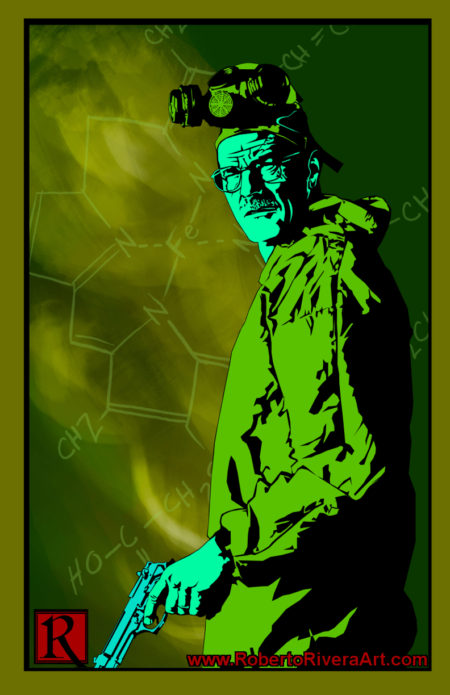 I’ve just started trying to do something with this Internet thing, figured I should have my own site and an Etsy store for my stuff instead of just selling at shows.

Because Breaking Bad is pretty hot right now, since it just ended on Sunday, thought it would be a good time to put together a portrait of Mr Heisenberg (or maybe it’s a really bad time, since the show is over now). By the way, the formula in the background is hemoglobin, the part of the blood that carries oxygen, because SCIENCE. I’m also working on Jesse Pinkman at the moment.

The big, exciting thing is that I’ll have a small table at this Friday’s Oakland Art Murmur/First Friday. I visited Oakland in time for September’s First Friday and it was the shit and now I need to move there. So I’ve got a few prints that my brother, Rick, will be selling for me to put in the California fund: “He Abides” (The Dude), “At Least it’s an Ethos” (Walter Sobchak, “The Good Man” (Ned Stark), “The Brave” (Arya Stark), “This is an Adventure” (Steve Zissou), “Ray…It’s Looking At Me…” (Peter Venkman) and “Club Girl”.

If you’re in the Bay Area, please come by on Friday between 5 and 10pm. My table will be on the 25th street block of Telegraph Ave. in Oakland. Hope to see you there!

Roberto is a Freelance Illustrator and Animator based in Milwaukee, WI, with an eye toward moving to Oakland, CA. He specializes in digital painting and traditional 2D animation, and has a pair of regional student Emmy awards under his belt (2010 & 2011). He's currently working on expanding his line of TV and movie portrait prints, while working on a series of fine art digital paintings of Old Hollywood stars in modern hiphop settings, as well as his first graphic novel, "Tortoise & Hare: Crittercide".