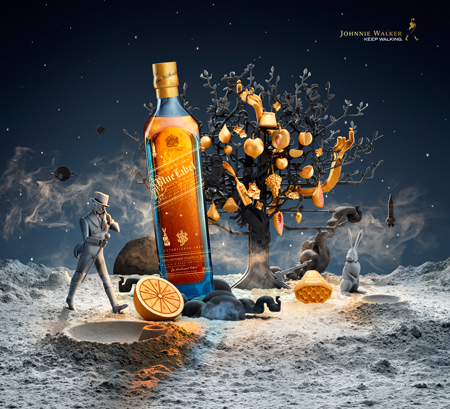 Shotopop was tasked by LOVE Creative to handle the Johnnie Walker 2013 Mid Autumn Festival Campaign for the Chinese market. This included a set of Key Visuals, special edition packaging for the Black and Gold Label bottles, and a special edition Blue Bottle design. The whole shebang, really. This years visuals would be loosely focussed around the legend of the Immortal Tree on the moon, Wu Gang, and the Jade Rabbit.

The Story:
In Chinese folklore, there is a story about a giant immortal tree that grows on the moon. Wu Gang tries to chop it down but it always just grows back
On the moon, the Striding Man climbed the immortal tree. As he ascended, he realised that it was taller than the universe itself. He found its branches heavy with infinite blossoms of gigantic fruit. When he bit into the tree’s treasure, he tasted the intense flavours of Johnnie Walker Black Label: smoky peat, deep chocolate, sweet vanilla, rich fig and zesty orange.
When the Striding Man reached the top of the tree, he understood that just like the immortal tree never stops growing, his own journey knows no end. Wherever he adventures, his message to us all will always be the same: Keep Walking.

The PROCESS:
Starting with the packaging design, we worked our way up to the special edition Blue Label bottle and finally the Key Visual. This was a bit more intricate, as we decided to build a set to depict the scene, instead of simply re-using the illustrations. For this adventure, we re-created the tree design, taste-notes and character in 3D, based on the packaging illustrations. These were then 3D printed, painted, assembled and carefully transported to the studio for photography, where Sam Hofman worked his lighting and photography magic.