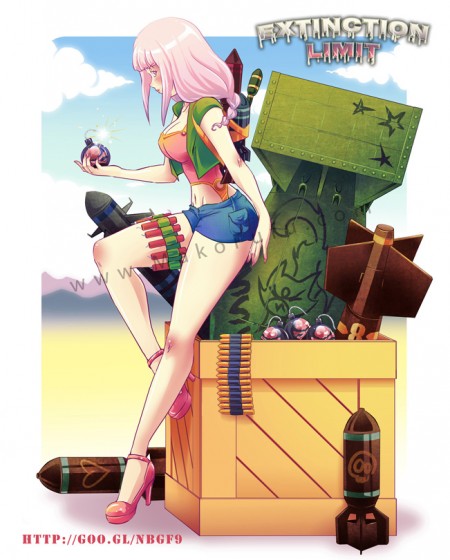 Illustrations for Kickstarter campaign for the Videogame project “Extinction Limit”.
The rewards include an exclusive Artbook with the concept art and special illustrations by Alex Midgett and Mako Fufu.

Mako Fufu is a multi-media artist who combines east and west graphical influences in order to create her unique art style. Born in Argentina in August 1st 1983, with a mix of italian, german, spanish and french blood, she was attracted by all things japanese from an early age. Maybe due to this mix, she cannot stay still, nor limit herself to a single media, style or theme: Mako Fufu is always eager to explore new grounds. Since words seems to be not enough to transmit her deepest feelings and switching moods, she canalizes it all in artworks wich may be used as a window, as a peep show of her heart. Her signature style could be defined as sensual and full of life. Her works include: -Graphic Novels for publishers in Europe and the Americas -Editorial/ad illustrations and storyboards for publishing houses, artbooks (such as Udon Crew-Capcom), magazines (Casual Connect,etc), and ad agencies. -Art Direction and Concept Art at the videogame company Joju Games for clients such as MTV, RealArcade, Playfirst and Comedy Central. -Teaching at the Argentinean School of Comics (EAH) -Solo and collective painting shows -Murals/street art -Developing her own online reality/art show: "P.O.P." ( http://www.youtube.com/makofufu ) She studied Graphic Design on the University of Buenos Aires and Animation at Patagonik Films Group. She have also won awards in competitions organized by Nippon Television and Udon Crew.