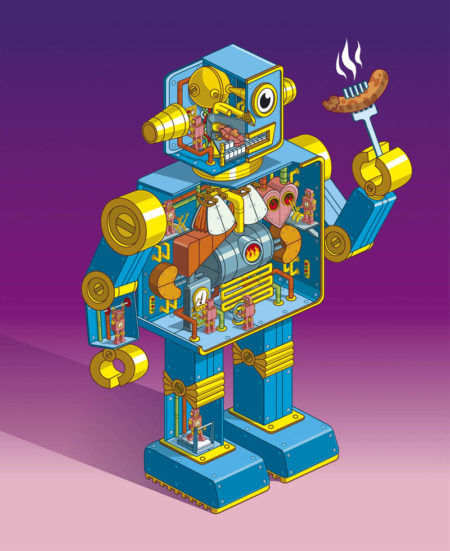 DDL: How did the Where’s Stig? job come about?

RH: I’ve worked on and off with Top Gear on the magazine for many years, and always kept them up to date with new projects I’d been working on.  Having seen some of my recent more involved cityscape type illustrations, in 2008 the team at Top Gear asked me to create “an unrealistic cartoon simulation” of the Top Gear studio for the Big Book of Top Gear 2009.  They were so pleased with the illustration I did that it got them all thinking – What if we were to expand the style into a whole book? I felt it had massive potential but would entail a huge commitment from me. So the idea of Where’s Stig? was born, essentially a Top Gear inspired Where’s Wally/Waldo? spoof involving The Stig, Top Gear’s resident tame racing driver.  We had several conversations about ideas, feasibility, timing and costs, and eventually we got the green light to go for it.

There’s such a wealth of visual material from the show. It’s great getting in all the adventures, geeky things and stunts they’ve undertaken, giving the show’s fans all the in jokes – there’s so much to choose from. The show can be a bit risqué at times and the publisher and Top Gear were very supportive in not wanting to tone down certain un-PC elements.

DDL: Where there any problems you had to tackle while working on the book?

RH: The biggest issue with doing a book (Where’s Stig?) on this scale is time. Six to seven months sounds like a long deadline but it flies past at a frightening pace, and it was the only job I worked on for the entire time. It’s a very labour intensive process and the print deadline cannot be missed if the book is going to hit the shops in time for the lead up to Christmas. So good time management was essential, right down to working out on a spread sheet exactly how long I could spend on each piece of artwork and crossing off the days as I went. There was no margin for overrunning with the deadline. 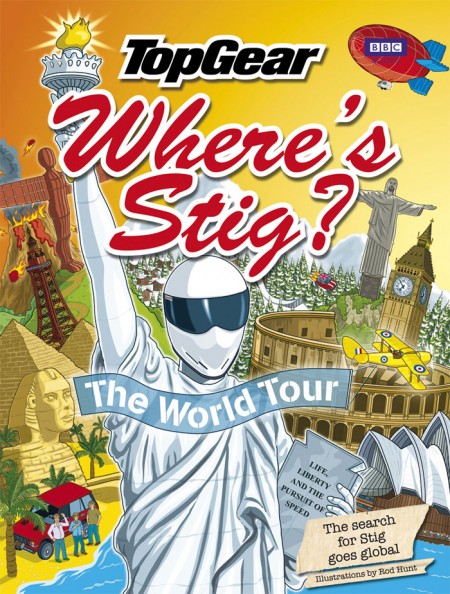 DDL: How successful has Where’s Stig? been?

RH: Where’s Stig? was hugely successful reaching number 6 in the UK Christmas book charts, and the 4th bestselling hardback non-fiction book of 2009, selling in excess of a quarter of a million copies that year. It’s pretty crazy to think I’ve had a Top 10 bestselling book! Since then I’ve produced a sequel, Where’s Stig? The World Tour, and there have been two miniature “Glovebox” sized editions, with the new Where’s Stig? The World Tour Glovebox edition out this September.

DDL: What’s a good pay day for you?

RH: It’s not all about money. One of my favourite commissions of last year, the cover for Looking for Transwonderland, was a modestly paid commissions but one of the most creatively rewarding, and I love working with Granta Books’ Artistic Director Michel Salu. Plus it’s won me loads of awards, so the reward has come in other ways. 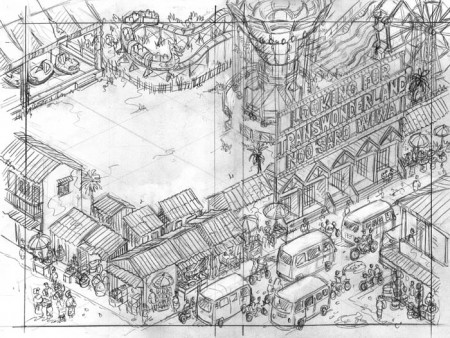 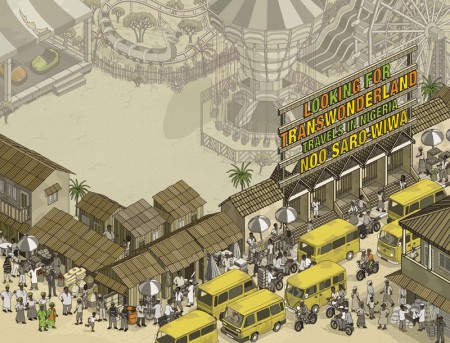 DDL: Do you get called Rob all the time or is that just a mistake I make?

RH: No, it happens all the time.

DDL: When you were young, did you want to grow up and become Luke or Hans?

RH: I suppose we all wanted to be Han Solo as he’s a swashbuckling bad boy, but probably relate to Luke more as a young person doing adventurous things. But boy, was Luke a wet and stroppy teenager!

DDL: Is being old an advantage in an industry full of youngsters?

RH: Are you saying I’m old Darren? There are definite advantages to have been in the industry for, ahem, a few years. Experience, knowledge and contacts come with time.

DDL: Why did you become an illustrator?

RH: Two events in 1977 unknowingly put me on the path to being an illustrator. Star Wars and the comic 2000AD. 1977 was a big year and I remember seeing Star Wars at 6 years old and it was the most exciting movie I’d ever seen! I also remember being being on holiday in Devon and going in a newsagents in Plymouth. My mum said I could have a comic, I wanted the one with the scary looking robot man on the cover. My mum thought it looked a bit grown up for me but I was adamant that was the one I wanted, so she bought it for me anyway. I’m pretty sure it was Issue (prog) 19, 2nd July 1977. Then she was kind enough (pester power!) to take out a subscription for me. From that moment I just wanted to draw robots and spaceships!

Even though I was a prolific drawer as a kid, I really didn’t consider art as a career until I was 17. Originally I was planning on pursuing biochemistry and horticulture, and was studying towards that, and was studying art just for fun. But the realisation grew on me that I wasn’t really enjoying studying the sciences as much as art and as I spent all my time drawing, art college beckoned.

DDL: Are you looking forward to the new Dredd film?

RH: I’m really looking forward to the new Dredd film. The reviews from the Comic-Con preview showing seem very positive. It sounds like it’s truer to the tone of the comic and character, and has lashings of ultra-violence. Hopefully people can then forget about the Stallone helmet removing cheesefest – even though Mega City One looked pretty good, it just wasn’t Dredd! 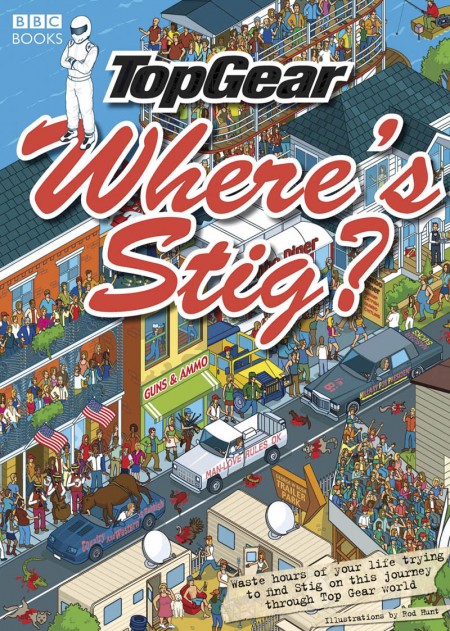 DDL: Clarkson, Hammond or May… Who would you prefer to have a bromance with?

RH: May. He brings out my inner nerd.

DDL: Is there a Mrs Rod Hunt?

RH: Not at the moment. Open to offers. 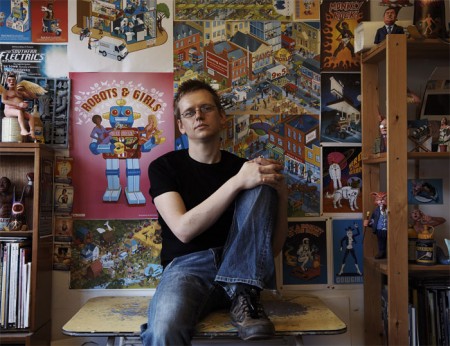 DDL: Did you actually get to meet any of the Top Gear presenters?

RH: I haven’t met the presenters in person, or the Stig come to that. The closest I’ve come is passing Clarkson, Hammond and May in the reception at the BBC offices in White City as they were coming out of a meeting at Top Gear and I was going into one with the production team.

DDL: Were you ever tempted to hide a Wally/Waldo in the artwork? 🙂

RH: No, that would have been asking for trouble from Where’s Wally’s publisher! But there are a couple of characters that were a deemed a bit too “risqué” (not by Top Gear or the publisher though) that have disappeared from the New York scene in new Glovebox edition of Where’s Stig? The World Tour. I’m not telling you which, you’ll have to compare the two different editions to find out!

RH: I didn’t make it to Comic-Con, but I was exhibiting as part of the Cartoon Network’s 20th Birthday exhibition that opened in San Diego during Comic-Con and curated by designer Mark Murphy. Around 70 artists were involved, and each was given a Cartoon Network character to interpret. I had to illustrate Dexter’s Laboratory.

A few weeks earlier in June I flew out to attend ICON7 the Illustration Conference in Providence, Rhode Island. It’s the 3rd ICON I’ve been too (I was a speaker in 2010 at ICON6 in LA) and it’s always a great conference, informative and inspiring. Flying around the world to attend a conference in the US might seem like an major expense but I feel it’s worth it, especially if you’re planning to break into the US illustration market. You can learn first hand from the cream of American illustration, and maybe meet a few of your illustration heroes to boot. Matt Groening and Lynda Barry were the star speakers this time. They were inspiring and completely hilarious! Don’t forget that business trips are all tax deductible too, so with that in mind it’s not unaffordable. I’d highly recommended going to the next ICON8 in 2014. 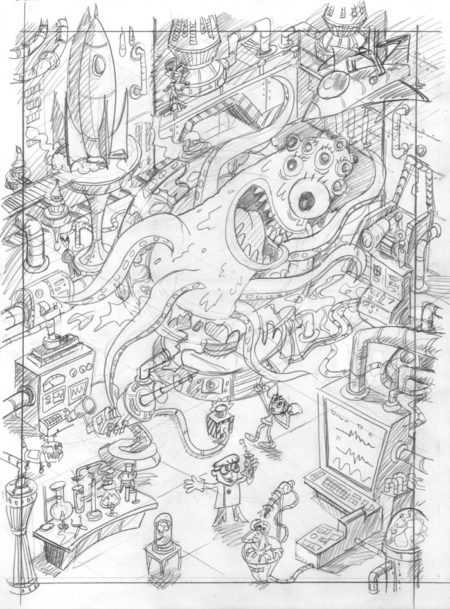 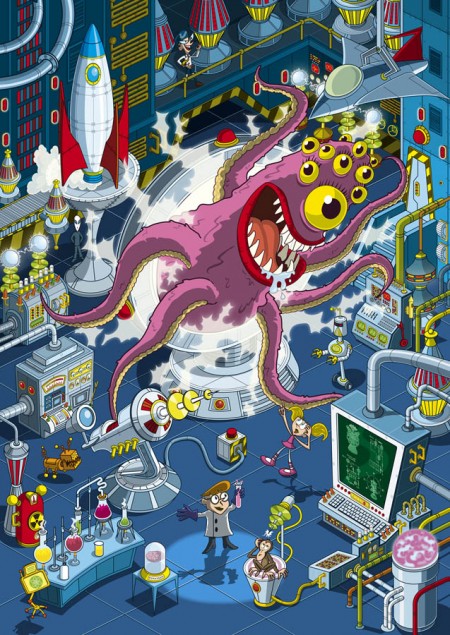 DDL: Have you always been a good at networking?

RH: I try to get out to private views of exhibitions on a regular basis here too, most recently at NoBrow last week for the launch of their Bicycle book.

Apart from the social aspect of attending events, an important part of running a successful business is to learn as much as possible about your industry and make new connections, and getting out and meeting people can open unexpected doors. You never know who you will meet and what new opportunities that might lead to. Some people see networking as a dirty word or something difficult, but it’s basically just talking to folks. It’s fun too and gets me out of the studio! 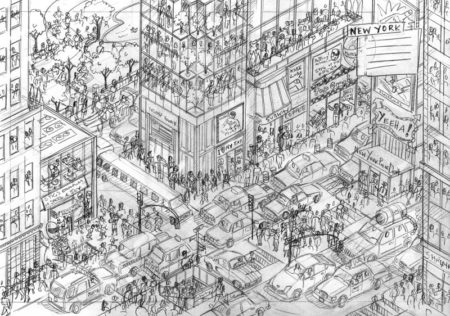 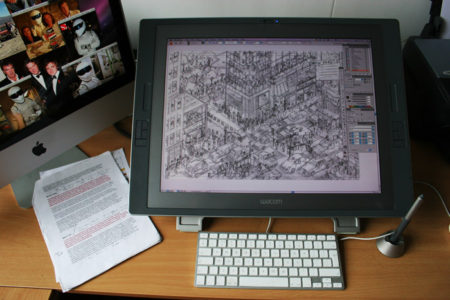 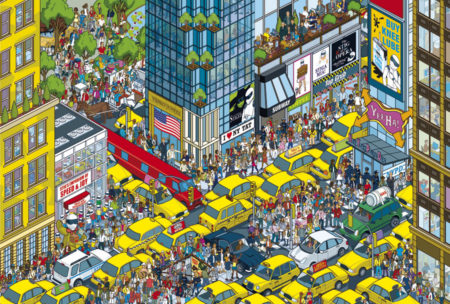 DDL: Aren’t illustrators suppose to be loners by trade?

RH: It’s part of the nature of what we do that we can spend a lot of time working on our own, but I don’t think illustrators are by nature loners and enjoy solitude. Judging by the attendance at illustrator gatherings like Yo! Illo and at private views most just need an excuse to get together, enjoy a beer and swap experiences.

One of the reasons I now have a studio is to separate work and home, and actually see people everyday. When I started out and worked from home, some weeks I would barely leave the house and see anybody – it starts to feel a bit isolating.  The social aspect of working in a studio environment is one of it’s most important benefits.

DDL: How do you feel about stock illustration?

RH: I have no problem with rights managing your own back catalogue of work for re-licensing, but I would never go anywhere near Stock Libraries. I regularly get approached by stock libraries and it’s always a straight “not interested”.

For an eloquent argument as to what’s wrong with Stock Libraries, read this article by prominent U.S. illustrator Brad Holland in a piece called ‘The Stockman Cometh‘. 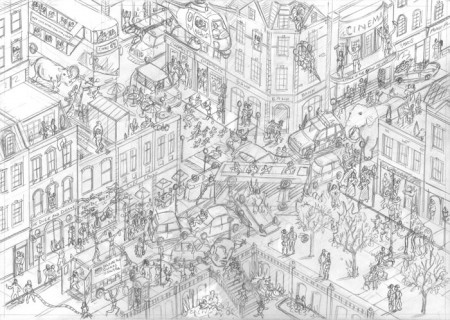 DDL: With all the globetrotting, do you have a healthy lifestyle?

RH: I keep pretty fit and healthy. I’ve been vegetarian for over 20 years and ride my bike to the studio every day, or walk if it’s tipping with rain. Being sat in front of the computer everyday isn’t very active so it’s important to get exercise when you can, and I’ve got no inclination to go to the gym to run on a hamster wheel.

DDL: Who are you?

RH: I am Ironman.

DDL: Thanks Rod! It’s been a pleasure. 🙂 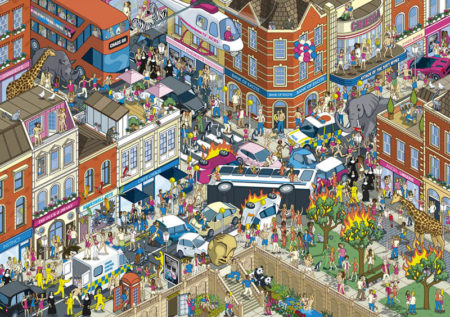 To see more, check out Rod Hunt’s website or visit Rod Hunt’s illustration portfolio over at hai for his latest news and work.