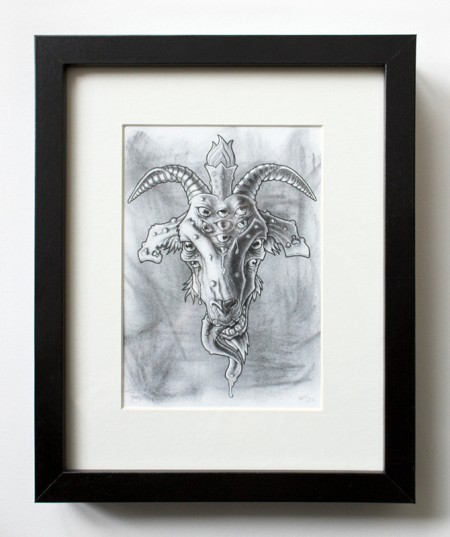 Do you know what day it is today besides – MONDAY? It’s H. P. Lovecraft’s birthday! Homeboy is 122 yrs old today!

To commemorate that and all things weird & from beyond I am releasing the framed Shub Zeroth giclee print.

After graduating from the Milwaukee High School of the Arts, I quickly escaped to the windy streets of Chicago to attend the American Academy of Art for a year. I soon learned that Truck Driving School was always looking for new blood and they recruited often from art schools. The following year I returned to Milwaukee, to find out why The Milwaukee Institute of Art and Design is so damned expensive. I've been a freelance illustrator/ designer for various companies, bands and publishers. Without further ado here are a few gems - STAR WARS, BUDWEISER, HUSTLER, DC COMICS, SAMSUNG, VAGRANT RECORDS, CHANNEL 4 CREATIVE, CINGULAR, THE NEW YORKER, SPIN, EMI, SPRINT, CLEAR CHANNEL, VANS WARPED TOUR, MARVEL COMICS, TASTE OF CHAOS TOUR, GUITAR WORLD, A BAJILLION BANDS and a bunch more stuff. I've never had a driver's license and I dropped out of art school...twice. My work has appeared in several publications, art books, movies, as tattoos, concert posters, skate decks, iPods, t-shirts, television shows and music videos. My work has also been bootlegged to high heaven. Lucky me.