Patrick Gannon – Night of the Yokai 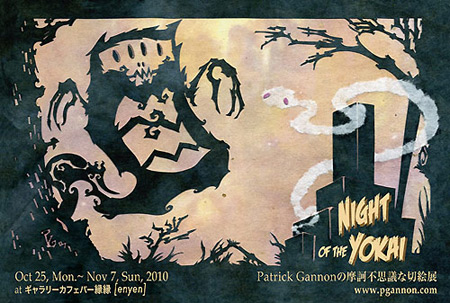 Just in time for Halloween, we’re letting the yokai out to wander the streets and haunt the cafes of Azabujuban. Yokai are uniquely creepy, quirky beasts that roam the Japanese nights, frightening, tricking, and occasionally falling in love with us mere mortals.

I’m thrilled to announce my first solo show, Night of the Yokai – Patrick Gannon. Created entirely in cut-paper artwork, this show invites all to explore a modern take on the haunted (and often hilarious) myths and stories of Japan.

Patrick's illustrations and artwork are made entirely of cut-paper (and often wood) in his studio in Tokyo, Japan, where he lives with his amazing wife and a very, very large collection of paper from all over the world.

Mixing bold whimsy with a subtle conceptual streak, his artwork combines influences from his life in Japan and his upbringing on a farm in New Jersey where he was surrounded (and occassionally attacked) by animals and the natural world. His interest in myths and fables, pop-culture, cool textures and weird critters invades his artwork.