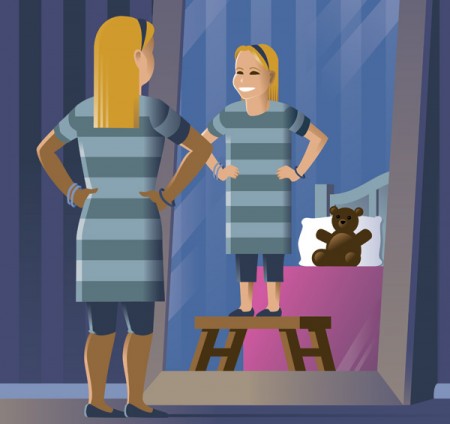 The story looks at girls reaching puberty earlier than ever before, some as young as eight- or nine-years-of-age. No one is entirely sure what has caused this shift in development. There is believed to be a link between obesity. Others suspect it might be from the hormones injected into livestock that eventually enters the food chain.

There are short- and long-term problems associated with maturing physically too soon. These girls are at often the targets of bullying (She’s different, let’s all make fun of her!) and misplaced expectations from their peers and teachers (Why isn’t she acting as mature as she looks?). They also have a higher risk of cancer later in life.

John W. Tomac is a Brooklyn-based illustrator. His work is a happy marriage of the mid 20th century style and contemporary ideas and concepts. John has worked with a number of newspapers, magazines, design and advertising agencies, corporations and non-profit organizations. His work has been recognized by Communication Arts. When not working, John is likely to be found running through the streets of New York City.