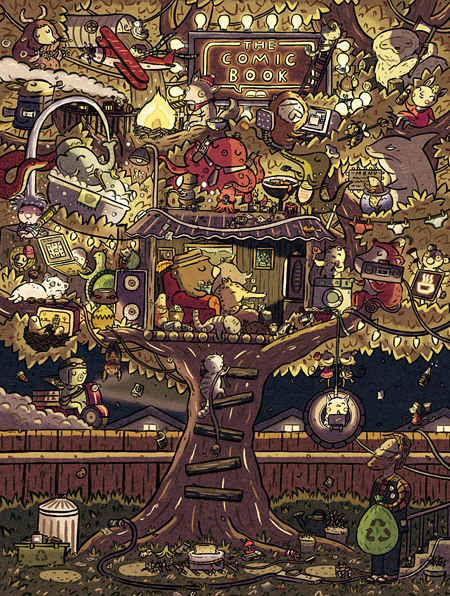 Howdy! My name is Matthew Scott and I am a colourblind freelance illustrator based in the UK. I’m currently working on my first full children’s book (long overdue) and am beginning to work on smaller editorial pieces for various magazines and publishers.

I love discovering new illustrators and artists every day, though that tends to lead to frequent rages of jealously/depression, but thankfully it also eventually encourages me to keep improving my own artwork.

You’ll find me drawing almost all day, every day hunched over a desk in a small hidden bungalow sheltered from natural light. 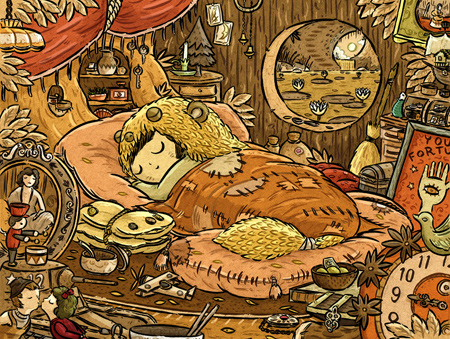 You graduated with a first class illustration degree in 2008. Do you think that universities and colleges prepare students for the realities of life as an artist?

I think that some do and some don’t. I was lucky because at Kingston University they instilled fear into all of us the second we arrived. They made us all realise from the start just how tough and over-crowded this industry is and that if we truly want to succeed it takes a lot more than good work to survive in the long run. It was far more business orientated than most people (especially laid back art students) expected it to be.

Thankfully I was forewarned enough at college and university that I had at least some idea just how hard it would be.

Do you think most students are a waste of space?

Not at all. Every student has something they can bring to the table. A lot might not realise where their strengths lie or are not committed enough until late in process, but most get there eventually. 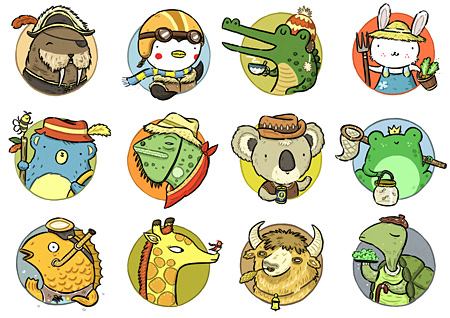 You have been very successful in working with some big names (eg Cartoon Network, Simon and Schuster, OUP) in a relatively short time. Why do you think this is?

Sheer determination! Even before I left university I had begun to contact people. I aimed high because I thought if I never try I’ll never know. Most didn’t reply or were too busy to answer my calls/emails/mailouts. It took me ages to eventually find the right people to talk to who would understand my work better, but I kept snapping at their heels until I managed to get the chance to go and see them in person. Once I could talk face to face it was much easier and I knew I had more chance of getting work. 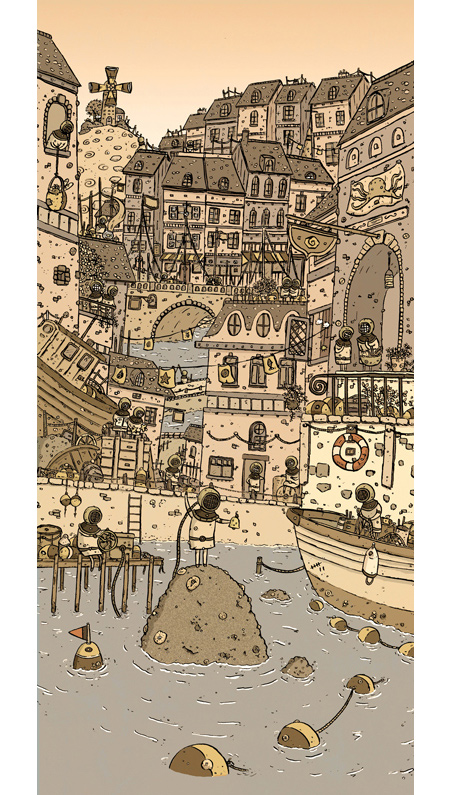 When you first started, how did you work out how much to charge for illustration commissions?

I was lucky enough that my first commissions were all non-negotiable flat fees, so they were all decided for me, but when eventually that situation did arise I panicked. I had no idea. A few Google searches later and I was just as confused. I decided in the end the best thing to do was to work out an hourly rate depending on the job’s length and description.

I don’t mind charging less if it’s something I would enjoy and if the job could possibly lead to more work, so I decided to be flexible depending on the job in hand. It’s all personal really. I didn’t become an illustrator to earn a lot of money (anyone thinking they can do is in for a tough ride!).

What’s been your biggest paycheque so far?

The money does put a roof over my head and food on the table but other than that I’m more interested in the work that was produced, whether or not the client has more work for me, and what I could have done better to improve the commission.

Do you prefer to work with traditional or digital media? Will the Wacom eventually kill off paint and canvas?

I still prefer to work with pencil and ink. I work far better with traditional media until it comes to colour. I’m colour blind which has its problems every now and then, so it’s much easier when finishing my work digitally to have the ability to change colours that I made mistakes with.

I’ve only recently started using a Wacom to colour or improve my work in the final stages and although it’s enjoyable, the ability to freely go back and correct mistakes is far too easy. Sometimes I don’t like that feeling… to me its the same as cheating. It made me think about lots of other people’s art who I love that work completely digitally and changed my opinions about them. When it’s so easy to go back and correct mistakes with the press of a button the best artists are being lost in a sea of people that just have more time and perseverence to keep pressing Apple key+z until they get it right.

Whilst people who work with traditional media will do the same thing at some stage, usually at some point they are in a position where a mistake is either permanent or they will have to live with the consequences. That’s not to say I’m against digital work, because I use it to colour and I have used it myself to work from scratch, but if I had the choice I would definitely prefer to work with traditional media. 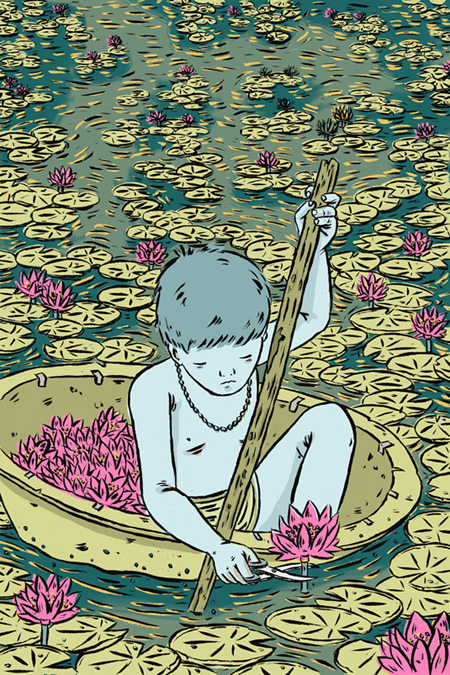 Do you attend many gallery shows or exhibitions? What was the last one you went to?

I’m not much of a gallery kind of person. I do enjoy going, but at the moment I’m spending so much time working on my own art that I forget to visit shows. I still look at other people’s art online everyday – it’s an addiction of mine to keep sifting through new illustrations, art and graphics on websites – but exhibitions have taken a back seat for now until my own work is going well enough that I feel I can afford to leave my desk and venture into the great outdoors. 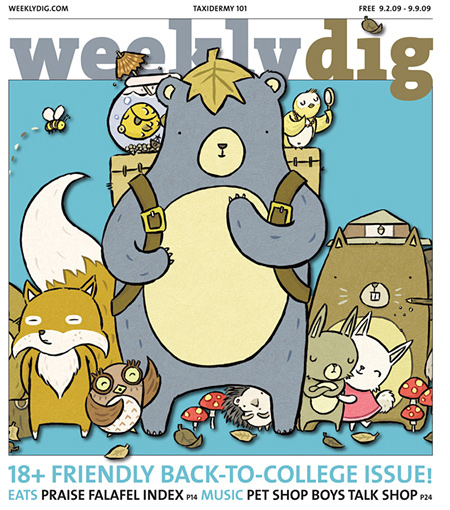 What were the benefits of winning the New Blood, D&AD award?

Not many. A confidence boost maybe but nothing else. When I was there about to pick up my certificate I was told stories of how a previous student had eaten their’s. Two years on I’m thinking maybe they were right to do so.

It’s nice to be recognised, especially right after your degree show, but I’d much rather someone, anyone, had actually come up to me and talked to me about my work, told me what they think, offered advice or some tips in starting my career. Instead I received a handshake and a certficate.

I realise there will be a lot of people thinking how ungrateful I am but that’s how I honestly feel. I’m proud to have won it, but was disappointed that not a single bit of advice or conversing was done in the process. It gave me more confidence in my work to go out and try to sell myself, but at the same time gave me no clue or indication as to just what it was about my work they liked. 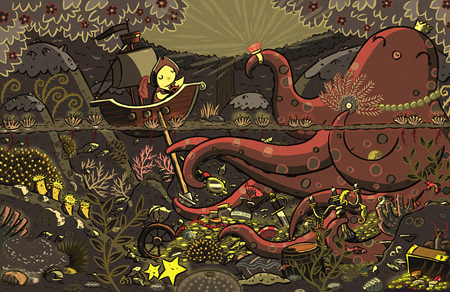 Apart from illustration, what other things are you into?

Music is my only other real passion. I can’t really work very well without it, I find I need something on in the background at all times when I’m working. I love seeing live music as well, though the nights of seeing gigs every week have slowly been replaced by nights of drawing bears and spread designs.

I’m just as passionate about discovering new music as I am illustrators, not always ‘new’, but music that has passed me by either due to my age or simply because I ‘missed the boat’. It’s an addiction that has led to me checking the Avalanches forums for over six years now. Some months I forget, some years have been slow, but I just can’t seem to let go, it has to happen surely… one year… this year…?

If you could collaborate with anyone, who would it be and what would you do?

My girlfriend is also an illustrator (http://www.sparrowprince.co.uk). She has great story ideas, so I’d like us to work together on a childrens book at some point. 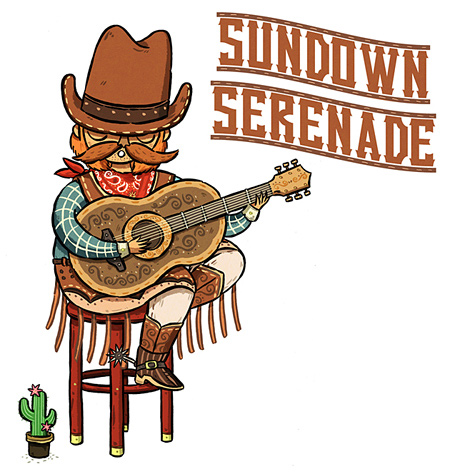 Could you have got to where you are today without going to university?

Definitely not. I had such great tutors and students in my class that without them I would never have got to the stage I am now at.

Before university it was always just tutors helping me and inspiring me to work harder and keep improving my work. Once I was in university I was surrounded by other people who all worked differently but were all just as good in their own way of working. It helped me enormously in developing my own style. I tried a lot of different techniques until I found one that I felt was right for me. 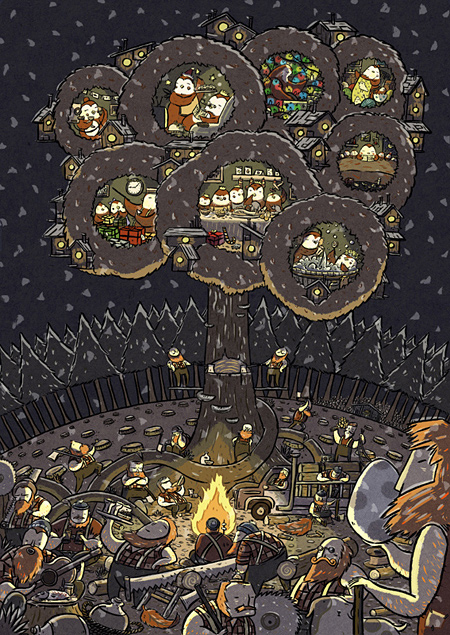 Too many to pick a few. Besides, if I did pick one or two names the chances are they would change by next month because I’m still discovering new work on a daily basis, so it’s impossible for me to say without regretting it at a later date.

The only artists I will always admire and constantly come back to are the ones who produced the books I loved as a child, but sadly most of them have passed away. 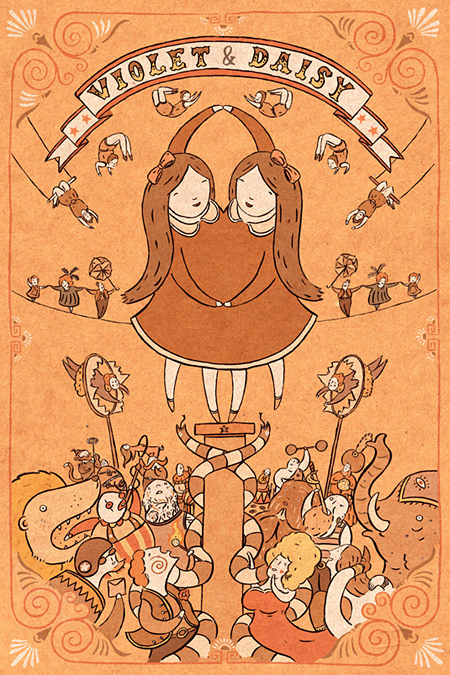 What’s next in the pipeline for Matthew Scott?

The long overdue childrens book. It’s had a ridiculous number of problems since starting, but it will one day see the light of day, I swear it…

Other than that I’m trying to step back from my work a little more and think about it from a client’s perspective. I’ve been getting so caught up producing what I want most of the time that I forget that a lot of clients don’t want busy/large/full colour artwork. I’m spending more time developing my human characters as well. I spent pretty much the whole of last year drawing animals, which was great, but I need a change. Less bears… more people… 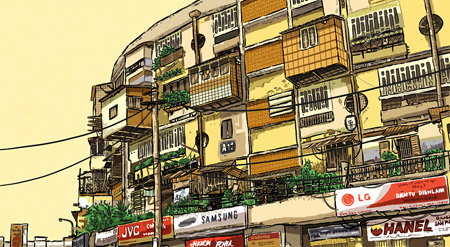 Thinking back to my childhood, Transformers. Although Michael Bay and Shia LaBeouf are trying their best to make me think otherwise.

Paris, only because I haven’t been to Amsterdam yet.

A year ago I would have said Dick and Dom without hesitation, but those Nintendo adverts are priceless…

If it isn’t Rainbow Drops or Haribo I’m not interested. 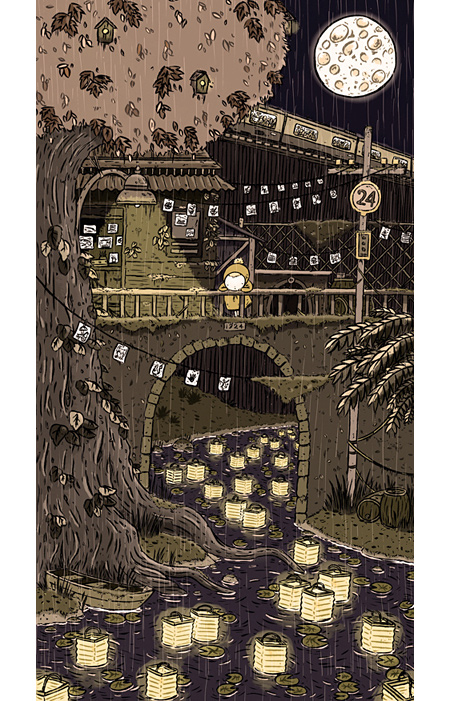 You can see more of Matthew’s work at http://www.divinepaperhouse.co.uk/.