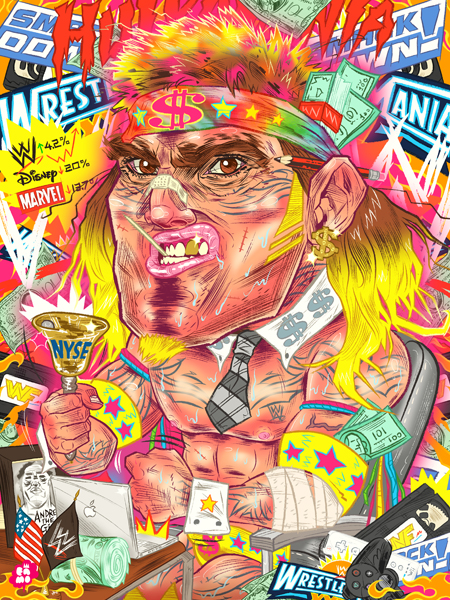 Eamo Donnelly (Pron. Ay-Mo not Emo) is an Australian based illustrator who is best known for his intricately hand inked, character driven illustrations, infused with an eclectically dynamic colour palette with a true blue Aussie cheekiness. Eamo has illustrated for PLAYBOY, VH1, CBS Interactive, Chow.com, Maxim, Nike, Mountain Dew, ESPN, Complex, GQ, Men's Health, Runners World, Blender, King magazine, Redbull, Radar magazine, RipCurl, Monument, Jmag and Golden Plains. As well as commercial commissions, his love affair for Australian eighties nostalgia prompted him to create personal works that reflected the beauty and uniqueness of the culture he grew up in. These works have been seen on Jeeps for Mountain Dew, wallets for Poketo in L.A, shoes for String Republic in France, t-shirts for Owl Movement, esky's, stubby holders, clocks, bar walls and street posters and in exhibitions in Melbourne, Sydney and in the U.S and the U.K. In 2009 he was short listed for best original illustration in the Australian Desktop Create Awards and in 2010 he will be a speaker at Melbourne's Design Conference AGIdeas. He is also an occasional Australiana reviewer for Melbourne's online sub cultural guide ThreeThousand. He is represented in the United States by Gerald & Cullen Rapp in New York and in Australia by The Jacky Winter Group in Melbourne. His work has been featured in Desktop, Computer Arts, EMPTY, Semi-Permanent, the vine.com.au King magazine, Attitude, Acclaim and arts features in The Age.