Andrew Hem – ‘One Leads to Another’ @ LeBasse Projects 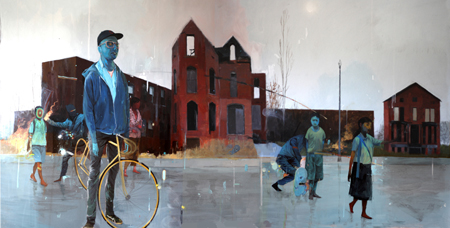 “One Leads to Another”
A Solo Exhibition by Andrew Hem

Los Angeles, CA – LeBasse Projects is excited to present, One Leads to Another, an exhibition of new works from Los Angeles based artist Andrew Hem. In this anticipated solo project, Hem confronts the viewer with themes of history and tragedy based on his native Cambodia.

Influenced by the idea of the “Butterfly Effect,” where small differences in decisions or movements can produce large variations in the long-term outcome of events, Hem creates a series of “what if” scenarios where one storyline diverges at the moment of a seemingly minor event resulting in two significantly different outcomes. In this case the artist imagines if the violent Khmer Rouge regime in Cambodia had never taken power and how the lives of the people would have been altered.

Hem’s paintings return to acrylic after several shows of using oil in order to create a more fluid and layered effect. The detailed characters portrayed are layered over hauntingly sublime backgrounds of a past that has been re-imagined based on the “Butterfly Effect” and leads to the title of the show: One Leads to Another.

Andrew Hem graduated from Art Center College of Design in 2006 and has exhibited internationally with shows in LA, Chicago, Seattle, NY and London. When not painting, Hem has built a career as an accomplished illustrator and designer working for clients such as Adidas, Lucky Brand Jeans, The Los Angeles Times, Sony Pictures as well as being published in the LA Times, Print Magazine, Guu Press and American Illustration.