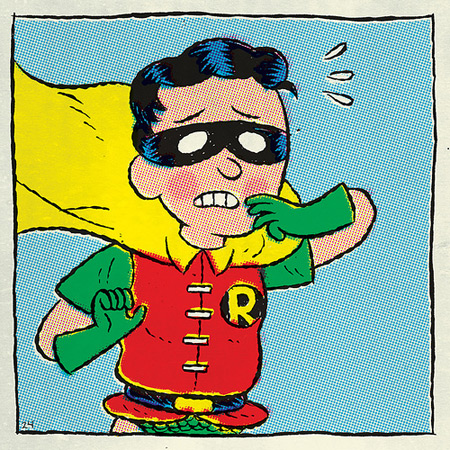 John is an illustrator and cartoonist living in Toronto. He writes about illustration, design, and visual culture under the pseudonym Robot Johnny for his personal blog on which he also distributes a small collection of typefaces including perennial favourites Girls are Weird and Turkey Sandwich. He conceived of Drawn!, like all good ideas, while goofing off at work. John stays inspired by a collection of hundreds of art, design, illustration, cartooning, and humour books and an unhealthy addiction to DVDs. His biggest influences are Charles Schulz, Jim Henson, MAD Magazine, Chuck Jones, B. Kliban, Jack Ziegler, the Marx Brothers, and Woody Allen. He also likes sandwiches.

Have you ever drawn a doodled of a Poodle eating noodles?

I haven’t until now! 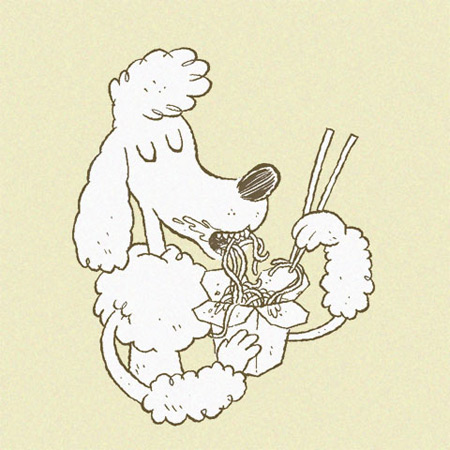 How much money do you earn from Drawn!? And when it comes to your illustrations… which companies pay more, Yahoo! or Hallmark?

I’m not rolling in it, that’s for certain. The blog makes enough through advertising for hosting and maintenance, but it’s far from a cash cow. The biggest payoff is the extra exposure for my own illustration work, and the connections I’ve made with other artists. As for which clients pay more, I never kiss and tell.

Do you have an agent or do you handle everything yourself?

I don’t have an agent, no. There are times of course, when it would be helpful to have someone help find work and take care of the business end of things, but I’d be afraid of relying too heavily on an agent, too. I’ve certainly learned a lot about business and about my own work habits since I’ve started freelancing as an illustrator.

I’m lucky that I have several regular clients that keep coming back for more. It’s definitely a plus to foster good client relationships, and find not only the type of work I like to do, and can excel at, but also the type of client that needs repeat work, whether it be regular comic features, or jobs that require specific skills like working in After Effects. I used to work in the creative department for a big TV network here in Canada, and luckily even after I left I’m able to continue working with them on various projects – not just because of my skill set, but because we’ve established a good working relationship in which they know what I can give them, and I know exactly what it is they’re looking for. 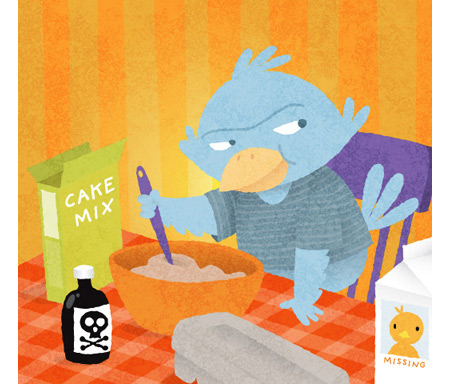 Do you ever get job offers from clients because they think you will post about them on Drawn!?

No, not at all. The types of posts that end up on Drawn! are links to artists that I personally admire and find inspirational. So, if anything, I’m endangering my own career, by promoting my competition! 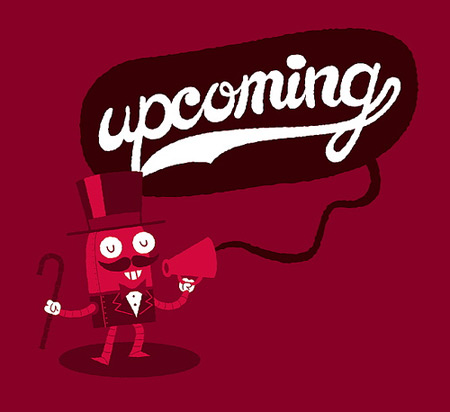 Art and illustration sort of dominate my life, but I’m also somewhat of a movie geek. I enjoy wordplay (including crosswords and Scrabble) like silly poetry and light verse, and combine it with my love of movies on my personal blog by writing reviews of movies I see in verse-form.

I find a lot of similarities between writing verse and drawing comics, in fact. I enjoy the challenge of trying to communicate a thought or idea using a structured form, whether it’s the rhyming pattern of a limerick or a standard 4-panel gag strip. I find the thought process very similar – paring things down, and distilling them to their simplest forms while still retaining all the information you need to communicate the idea AND have everything fit into the right panel, or syllable, and follow a beat or rhythm. When you pull it off, and it works, it’s a great feeling – like solving a puzzle. 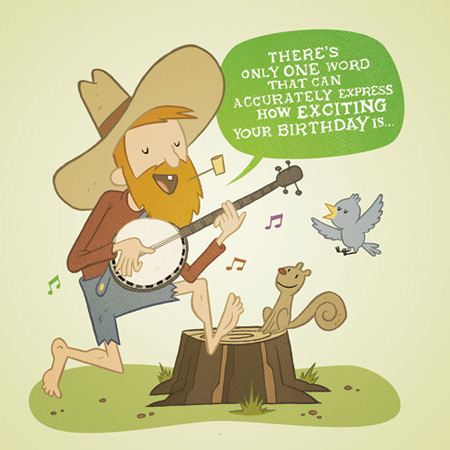 Since starting Drawn! that list changes every day, but I’m constantly awestruck by cartoonists who have mastered simplicity and economy – those that can restrain from drawing ”too much” and manage to use the most minimal lines and scenery – Seth, James Kochalka, Ivan Brunetti, Tom Gauld, Lewis Trondheim, Nicolas Mahler, Patrick McDonnell… I’m sure I’m forgetting about a hundred names, and I could go on, and on… And those are just the cartoonists.

Do you think Christopher Lloyd’s portrayal of Uncle Fester in the Adams Family was better than his part as Dr. Emmett Brown in Back to the Future?

Has Christopher Lloyd ever given us a performance better than that of Dr. Emmett Brown? 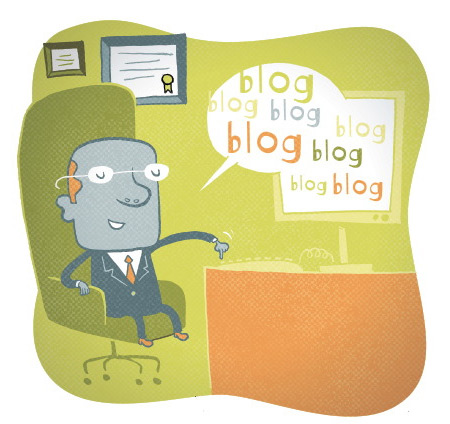 Are you really a Robot? You blog like it!

My website began in 1997 as a simple website to distribute some free fronts I had created under the name Robotic Attack Fonts and using the pseudonym Robot Johnny. In 2003 I reformatted it as a blog. The fonts are still there, but it’s primarily a blog. The blog part itself has evolved over time, into more of a work journal. For much of the site’s existence I was writing in character. Robot Johnny is pretty much myself, but far more self-righteous and indignant towards the human race.

I used to post more illustration and design links, but now Drawn! has become my outlet for that. And trivial personal things, or quicker links that don’t require much discussion now find themselves on my Twitter or Tumblr pages.

So now the site is home to my movie reviews and sketches, finished work, and news from the drawing board.

Could you ever see your work being hung in a gallery? Do you have any ambition for it to be on display as Art?

I make no claims that any commercial illustration I’ve done is fine art. I definitely believe there’s a line between the two. That said, I’d love the freedom to do more personal work with the intention of it being put on display. A few of the Drawn! crew have even casually talked about the possibility of doing a group show together. 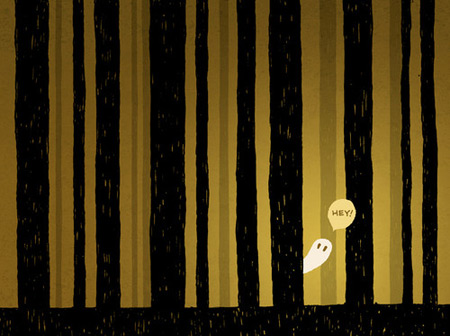 As I write this, I’m working on a comic with Ryan North of Dinosaur Comics. He’s written a story that I’m illustrating that will hopefully see it self printed in an upcoming volume of Flight. It’s always an interesting challenge drawing comics or illustrating a story that someone else has written, since the art has to perfectly complement the writing, and vice versa, without either overshadowing the other. Luckily it’s true that good art can’t save bad writing but good writing can save bad art, because Ryan’s such a talented writer, that I can just hand in some stick figures and call it a day.

What’s next in the pipeline for John Martz?

My new year’s project is to redesign my blog, portfolio, and comics sites to look more cohesive as a singular site. Right now the three are pretty separate from each other and could use some better integration.

I’ve got a few other projects up my sleeve, but don’t want to talk too much about them just yet. One is a rhyming kid’s book I’ve written that needs to be illustrated still. It’s about animals, so it should prove to be fun. 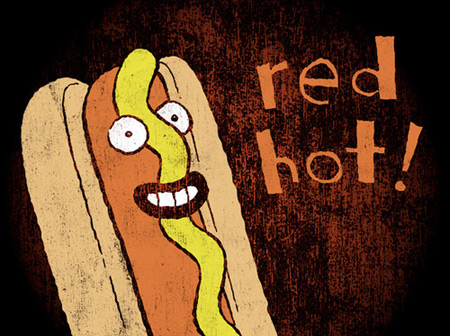 Pffft. Batman. I was at the most impressionable age when Tim Burton’s Batman was released in 1989, and suffered from a severe case of Batmania. My best friend and I even renamed my treehouse the Batcave, and painted Batman logos all over it. We even started a Batman club that had a test you had to take in order to join, questioning your knowledge of all things Batman. We were the only members.

I would do anything for love, but I won’t listen to Meat Loaf. You can see more of John Martz’s work at
www.JohnMartz.com