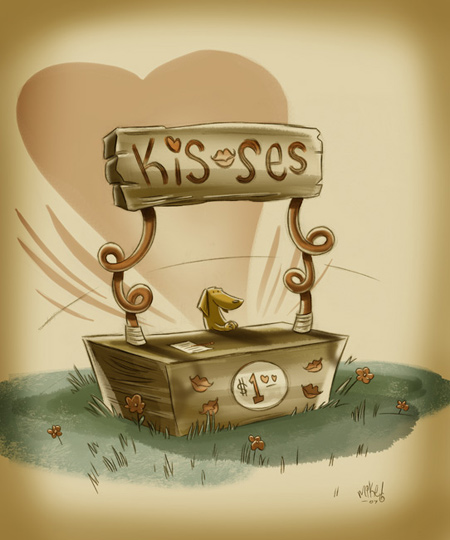 Mike Maihack is a graduate from the Columbus College of Art and Design and spends his time drawing pictures of pixies, superheroes, space girls and just about anything else he can think of that might involve a giant pink heart or serving tea. He is the editor and art director of the upcoming Christian comic anthology, Parable, creator of the weekly all-ages webcomic comic, Cow & Buffalo, and member of both the bi-weekly art challenge group, DrawerGeeks, and all-ages webcomic alliance, Lunchbox Funnies. Currently Mike is hard at work editing and contributing to a second volume of Parable, making slow progress on his â€œjust for funâ€ sci-fi epic, Cleopatra in Spaaace!!, and watching lots of movies with his wife and two Siamese cats down in far too hot and humid Tampa, Fl. His most recent work can be found in the Tori Amos inspired anthology, Comic Book Tattoo, published by Image comics.

Do you have a secret identity?

That would be telling, wouldn’t it?

So we know you’re a fantastic illustrator and you draw great cartoons and comics, but what I would like to know is how do you actually earn your bread and butter?

I work at a place called Saint Leo University where I spend my time drawing up illustrations and graphics for the online courses that they offer. Not the most illustrious day job, but it's close to home and I get to spend my day in front of a computer which is just fine with me.

Other than that I take on some freelance here and there and do fairly well with my own comics and other side projects. 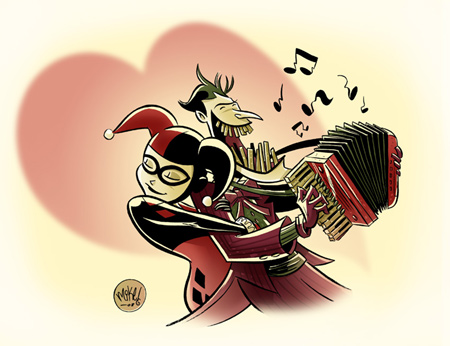 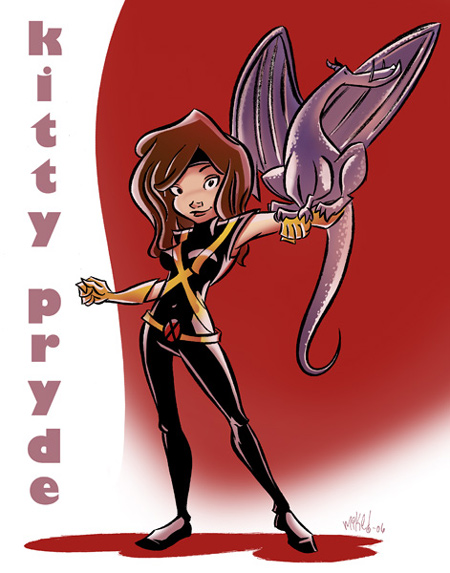 Who is your favourite mutant from the Marvel universe?

Kitty Pryde! Though, Molly Hayes from Runaways has been slowly taking over that spot since she debuted.

Those familiar with my blog will know that I'm huge into movies and music, though they may not know to what extreme. Jen and I try to go to the theater at least once a week and I'm addicted to buying special edition DVDs even though I never have time to watch them, much less open them. And I listen to music about fourteen hours a day. I love it so much that if I wasn't drawing all the time, I'd be practicing my guitar more so I could be a rock star. I still kinda wish I was a rock star.

I'm not an avid TV watcher, but there are a variety of TV shows I try to keep up with too. DVR has been a Godsend. I mean that literally. I think God was watching us rip our brains out trying to remember to set our VCRs and finding blank VHS tapes that one day he just said, â€œI shall give them DVR.â€ And it was good. 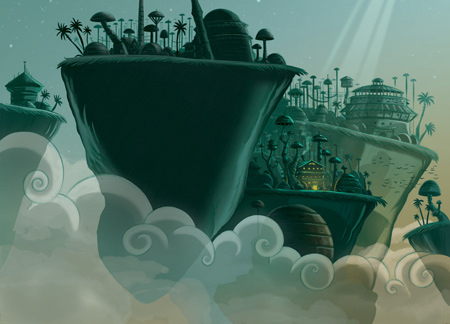 What do you get out of all the conventions you attend?

I don't think I really attend that many. Not as many as a lot of my peers do at least. But my favorite part about conventions is just seeing all of my friends who I only really get to see when I go to these things. We spend so much of our time talking to each other online or exchanging emails that it's nice to just being able to hang out and drink a beer or something. Except I'm usually the one getting made fun of for ordering an appletini. And I never do hear the end of it. And then someone starts an argument and I'm dodging a pool stick and the next thing I know there's appletini all over my favorite shirt. Actually, my friends suck. 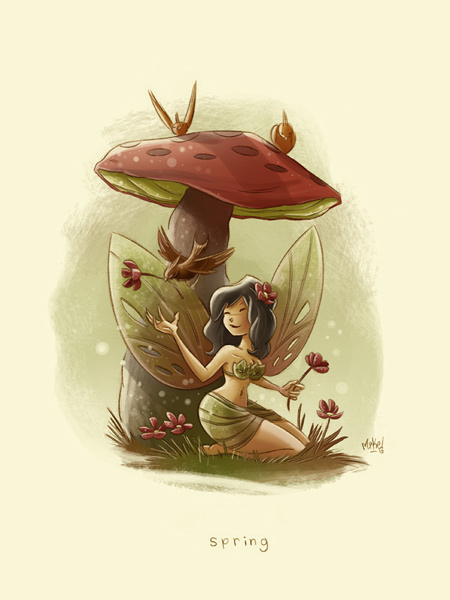 Alive? Well, wow. There's a ton. Jeff Smith has probably been my biggest influence for as long as I can remember and the reason I started drawing comics in the first place. Craig Thompson almost made me get up and quit after I read Blankets. Just about four days ago I finally read through the first four Scott Pilgrim books and have now joined the giant legion of Bryan Lee O'Mally fans. Those books are incredible. I think all my favorite artists draw comics.

But honestly, and I mean this too, my absolute favorite artists are the ones I consider friends. Everyone involved with Parable, the Lunchbox guys, my fellow Floridian artists- seeing the awesome work they produce is what really inspires me to create awesome work too. Most of the time I'm just trying to keep up.

And then there's the countless number of artists I discover on the web. I think there's a new one everyday. I still remember the first time I discovered Bill Pressing and I was like, â€œHow am I just now finding out about this guy?â€ I do that a lot. 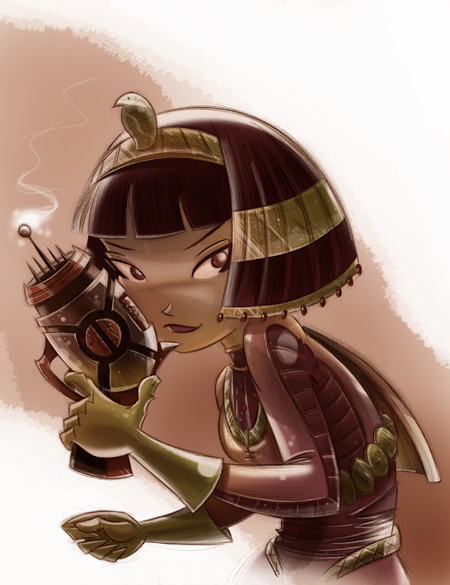 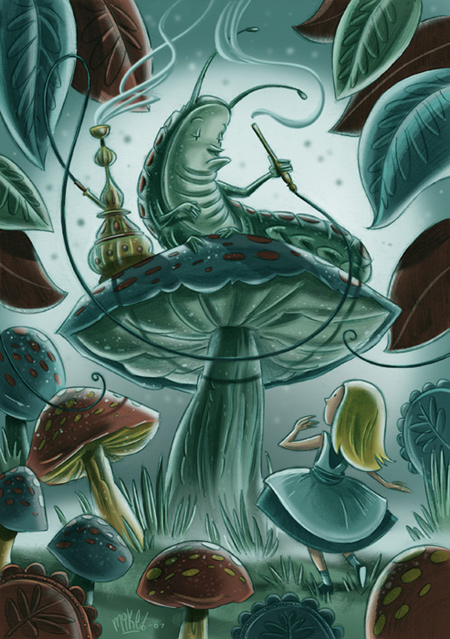 Web-comics… why do it, why not just self publish a real comic?

It's cheaper! Haha. Seriously though, it's cheaper. You don't have to front the expense to print a ton of books and just hope you'll somehow make enough money to print the next issue. Webcomics are just so much easier and instantaneous. Like Kool-Aid. Plus, I'd like to have my comics read by as many people as possible regardless if I'm making money from them or not. The internets make that possible. The webcomics community is one of the best communities in the world. We all totally promote and support each other because, for the most part, we're all in the same boat. We all are just doing what we love regardless of financial gain.

That said, I am actually starting to branch out more into the print world with my C&B collections and Cleo and other stuff. But I can't ever see me leaving the webcomics world entirely. I'd never have been able to do something like Journey Cow in print. It's just more fun to be on the web. 🙂 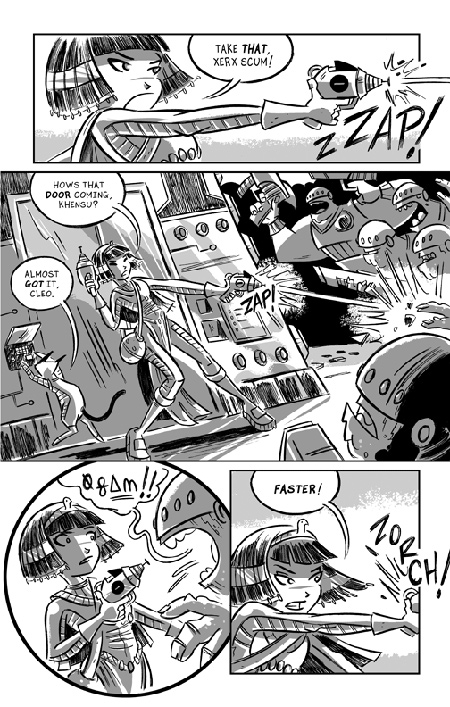 Do you ever dabble in the realm of animation?

Well, I minored in animation in College because I honestly thought that's what I was going to do after graduating. But then that whole traditional animation field kinda crashed my third year in and I never pursued it any further. Now I'm content just drawing comics.

I still love animation though and drag my wife to more animated films then she'd probably like. Seeing Cow & Buffalo animated would certainly be cool, but someone would need to show me how they are drawn from something other then a three-quarter profile. I still don't even know.

Your book ‘cow & buffalo – adventures in sandwich making’ in your store on your site – you offer to do a free sketch inside when one is purchased. So, let me get this right, not only does it only cost $10, you also get an original bit of artwork thrown into the bargain?

Haha! Well, I hope others see it that way! But yeah. The least I can do for someone buying my silly cartoons is to draw them a little sketch. 🙂 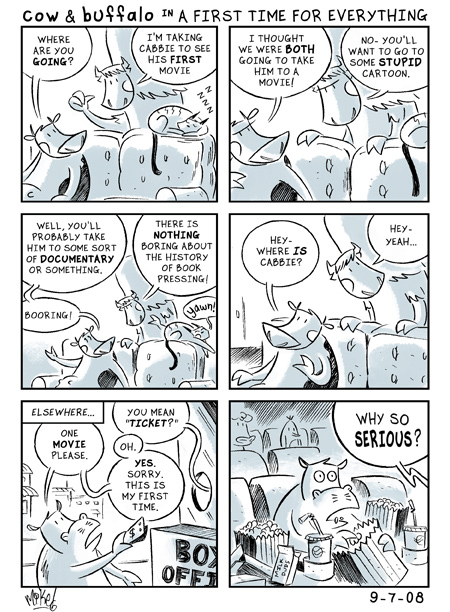 Over thirty other creators and I are in the midst of Parable, Volume Two, an anthology meant to inspire the themes of faith, love and grace (the first volume is due out this December). Organizing that is my biggest project at the moment.

As far as working directly with another artist, that would depend on the project and my availability. Most likely if I did work collaboratively it would be with one of my friends, but it just depends on what comes up. I'm so busy with my own projects that I seldom have time to focus on anything else unfortunately.

What’s next in the pipeline for Mike Maihack?

I'm putting together Cow & Buffalo's second book right now. That should be out early next year- just in time to get lost in the midst of the release of Scott Pilgrim vol. 5. 😉

I'm also doing my best to plow ahead with Cleopatra in Spaaace! which is tough since I only work on it during my free time- of which I have none. I have four issues outlined though and do intend to finish them even if it takes me the rest of my life. 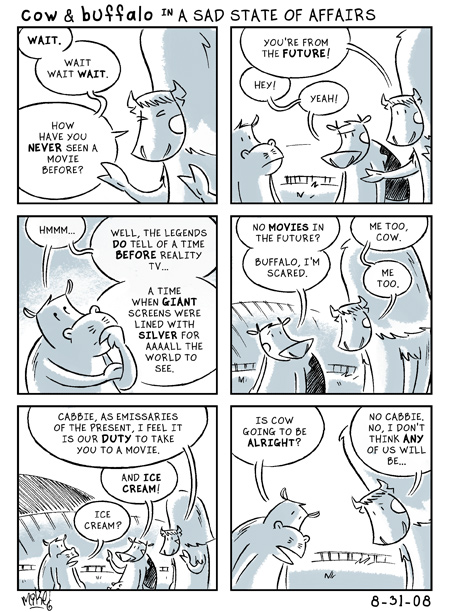 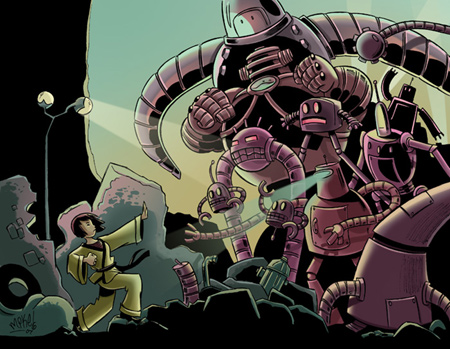 NONE! My friends will vouch for me on this- I am one of the pickiest eaters known to man and tomato sauce is at the top of my list of least favorites. I can really only stand it on pizza or lasagna, and even then it needs to be barely on there.

Alice in Wonderland or Alice Cooper?

Alice in Wonderland! I'd love to do a whole project with that some day. And do people even still listen to Alice Cooper? Doesn't he just play golf now? 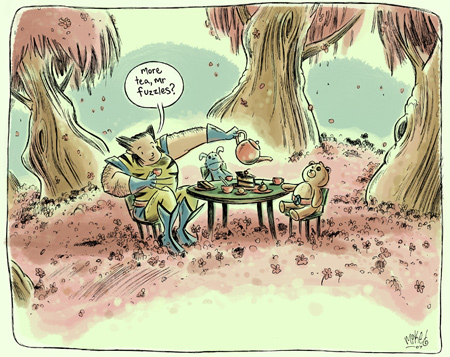 You can see more of Mike Maihack’s work at
www.cowshell.com