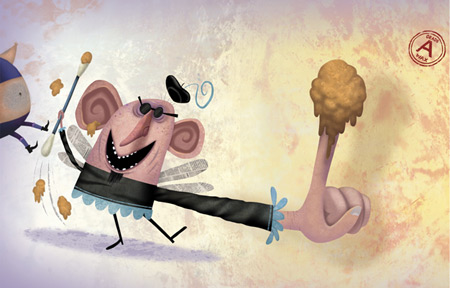 As a kid Michael wanted to be Eddy Munster and have a pet Creature from the Black Lagoon. This was impossible, so he created his own creepy world to inhabit. Michael developed his drawing skills by copying mummies and piranhas out of checked out library books. In his teens Slack’s artistic aspirations gravitated towards underground comics and punk rock gig poster graphics. After attending a summer art program at Cal-Arts, Michael decided that art school was his only real option for a higher education.

Michael enrolled in the San Francisco Art Institute and went from painting moody pictures populated with all sorts of strange creatures to large abstract oil paintings, and in 1992 earned a Bachelor of Fine Arts Degree in Painting.

Upon graduating Michael turned his love of monsters into a career creating and animating characters for computer games. After only a few years in the gaming industry Michael decided to jump on the freelance roller coaster which he has been happily riding ever since. Michael’s illustrations have appeared in books, magazines, and on TV. His paintings and drawings have been exhibited in the U.S. and Europe.

Currently Michael is fulfilling one of his life long dreams illustrating children’s picture books. Michael has two new books scheduled for release in 2008.

Do you ever have nightmares? Like being chased by giant monsters?

I used to be plagued with chronic nightmares. Really graphic and weird. I’d wake up terrified, then a moment of relief that I was dreaming, go back to sleep, continue the nightmare where I left off. Repeat this for eight hours and that is how a night would go. Then I had one and it seemed to be a resolution to the previous years of night terrors. It was kind of like seeing the last instalment of a TV show, "Oh so that’s how it ends." and then they just stopped completely.

One reoccurring dream I had as a kid were these giant swampy plant monsters storming through a shopping mall. I enjoyed this dream though. They didn’t hurt anyone they just smashed up the mall. Leaving behind, busted appliances, mangled racks of clothing, and giant clumps of dirt. 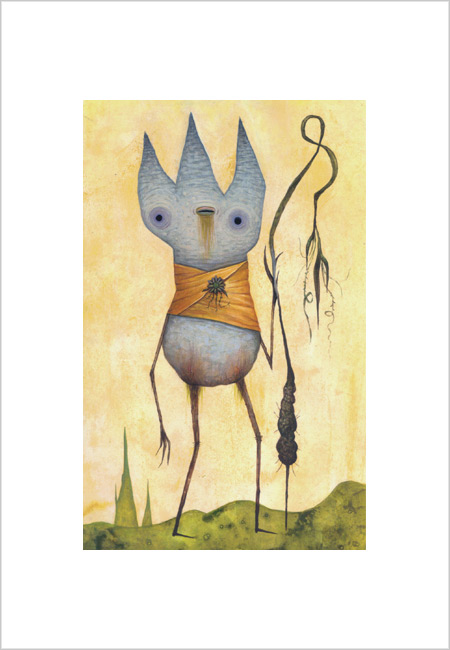 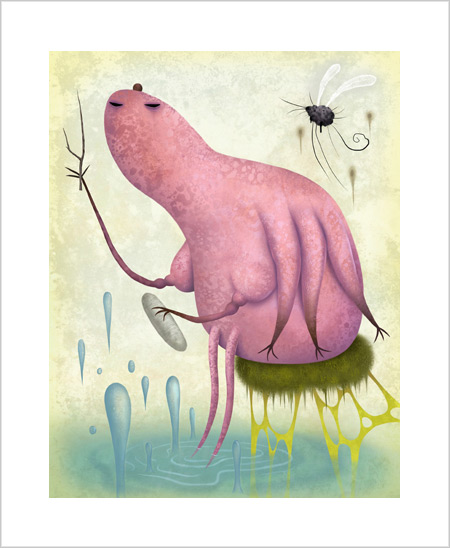 How much are you making in royalties from Chronicle books for ICK! the game?

Nothing yet. It just came out. You have to pay back the advance before any royalties kick in. The royalty changes depending on how many copies sell. After certain sales goals the percentage increases. It is going to be featured in the December issue of Mad Kids Magazine. I’m very psyched and honoured that MAD wants to have it in the magazine. How cool is that? Hopefully it will get all the kiddies to start nagging their parents to get them a copy.

How did ICK! come about, did you approach them or did they approach you?

Well, the initial idea came while playing dominoes with my Grandmother. She refers to the draw pile as "the bone yard". I thought, "that would be cool, a big gross pile of stuff you would need to draw from". I came up with the character and the first version of the game which was more of a matching game. Then it morphed into a Crazy 8’s type of game with specialty cards to interrupt play, penalize players, etc. After initial game testing and showing it to some friends, I realized the game logic needed to be changed to a collection and set building game. I was at Chronicle showing my portfolio to a designer in the children’s book department and I took a prototype in with me as a portfolio piece. She asked to leave it to show the art director. A few weeks later I got a call saying they were interested in publishing it. 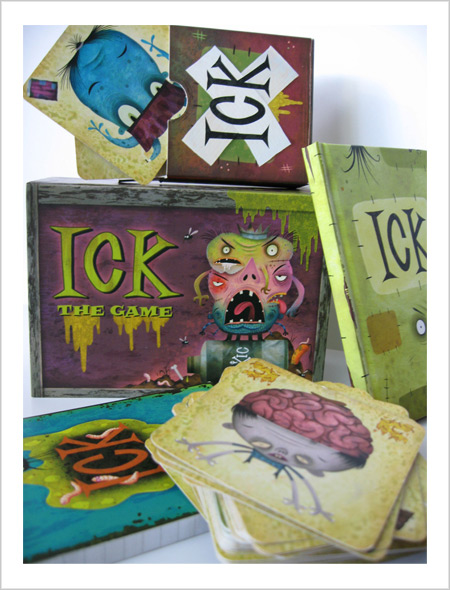 Right! Bottoms… Why does Farttholamew (one of your monster characters) have a bottom for a face? Are there any hidden meanings in your character?

That’s just who he is. No hidden meanings. I’m not one for allegory. I tend to be more crass and stupid.

Travel! I don’t do enough of it. I recently went to Stockholm and Berlin. I would have liked to have stayed in Berlin longer. Let’s see… I’ve started collecting vintage sci-fi books with cover art by Richard Powers. Plants, I love plants. Not just the giant one’s that smash up shopping mall’s, but exotic and non exotic alike. I think that if I wasn’t an artist a botanist would be high on my list of alternative careers. 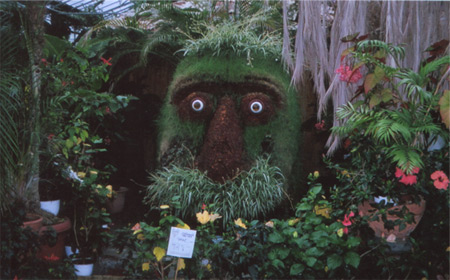 Wow! There are so many. Top of the list would be Henrik Drescher, Melinds Beck, Laurie Keller, Lane Smith, John Hersey, Darren Waterston, Bob Staake, Calif Brown, Nate Williams, Ronald Kurniawan, Grady McFerrin, Hekio Muller, Brendan Danielsson, Attaboy, Ben Walker, and on and on and on….

The lamp designs you did for Moody Buddha are great! The illustrations are very appropriate for the children's market. You seem to be having pushing all your work towards the children's market over the last couple year. With this in mind; your work like the Land of O is not suited to the children’s market in any sense. So when you’re working do you have to refrain your work to suit the market you’re gearing your work towards, or was your work like the Land of O and some of your darker personal stuff – just to shock? In other words is your style naturally darker and more sinister?

The marriage of words and images is something that I’ve always been drawn towards. Picture books are a unique medium where the illustrations hold the same weight as the words, and in some cases become more important, It a similar thing with comics. I don’t really gear towards one particular market. As your work keeps evolving so do the ways it can be used. Since I started illustrating, the majority of my work has been somehow connected to the children’s market, whether it is, animations, magazine features, or character designs. Even my editorial work tends to have some type of "kid" angle to it, and I love it! This type of work suits me well, and is where my creative sensibilities are. The only restraints on my work are self imposed as I’m a bit of a perfectionist and detail freak. This is where the painting comes in. It’s a playground. What is great is its breaking me away from my perfectionist tendency and is becoming more prevalent in my commissioned work.

I never do anything for shock value. I think the stories in Land of O are more melancholic, funny, and somewhat innocent, especially the "Loss" section. Land of O is a "what if" scenario. What would if be like to live in a place where the things I fear most like, glutinous over consumption, greedy global capitalism, and excessive genetic tinkering, have become common place? What kind of characters would populate this type of world? I’m still very fascinated with this idea.

So I guess I would say my style is goofy, with a dash of agitation, and melancholy. 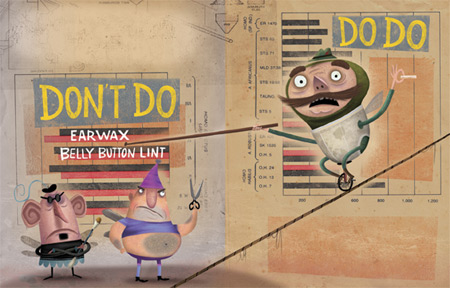 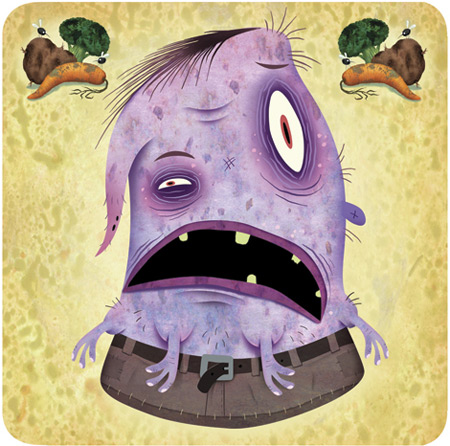 If you were a monster, what would you look like?

Kind of apish with extra arms, whistling spout on top of my head, and a set of giant humming bird wings. Oh and a head the swivels around 360 degrees.

Hot spot cities? I don’t really know. Brooklyn was pretty happening when I left. LA has a thriving art scene. Thinkspace in LA has great shows. DVA Gallery in Chicago is great gallery. I’d love to be in more shows in Europe. My dream space to show in would be in the New York Public Library. That is one of my favorite places. 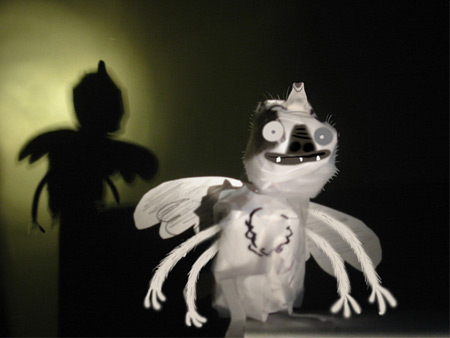 I consider most of my commissioned work collaborative. For example with ICK, I had my nieces and nephews, family, and friends, game test and make suggestions on how to improve the game play. My girlfriend came up with names for some of the characters. With books there are art directors, editors and designers, making suggestions. Some are great that really make the end product much better and then there are some that get chucked out instantly. There are two projects I’d like to fish around. One is a fun twist on the history of character design and the other would be to curate a show of "digi-rigonals" one off digital works of art to hype digitally created works of art. 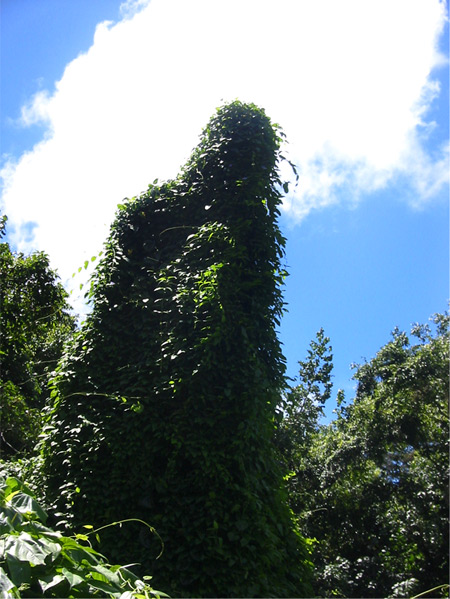 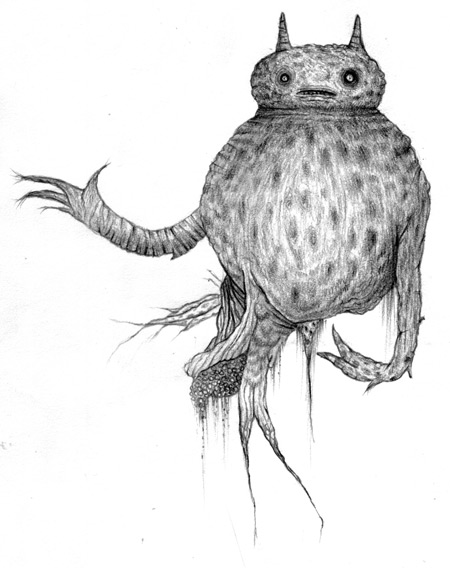 What’s next in the pipeline for Michael Slack?

A ton! A solo show at Blue Bottle Gallery this December. Also this December a group show curated by Heiko Muller at Feinkunst Kruger, in Hamburg Germany. Two more children’s picture books scheduled for publication in Fall 2008. Also, I have just sold my first children’s book that I did both the writing and artwork. 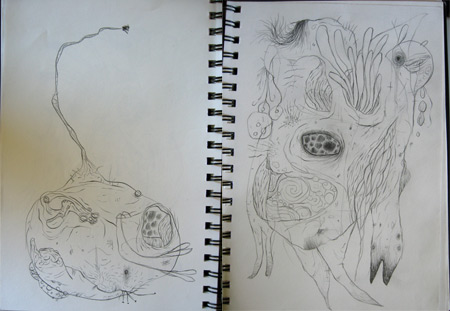 Silver for sure. However garlic may now be stronger than the U.S dollar.

Fingers! They pay the bills. GET BACK TO WORK! Lazy fingers. 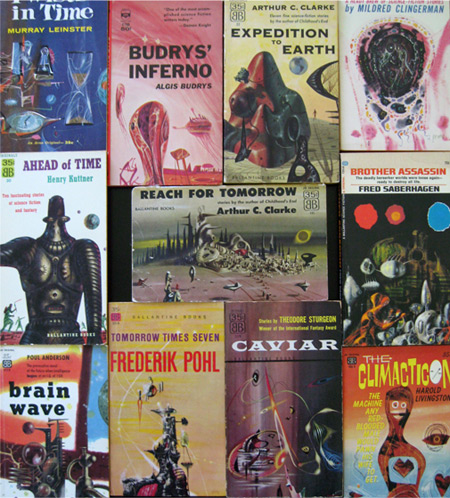 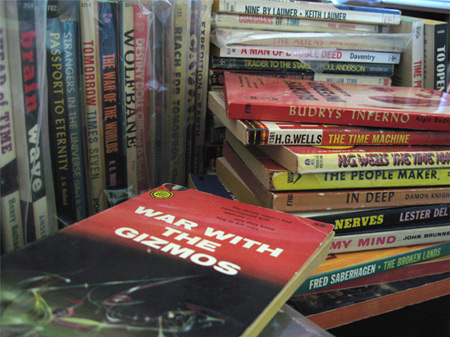 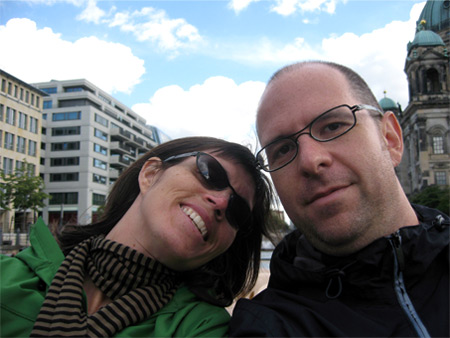 You can see more of Michael Slack’s work at
www.slackart.com