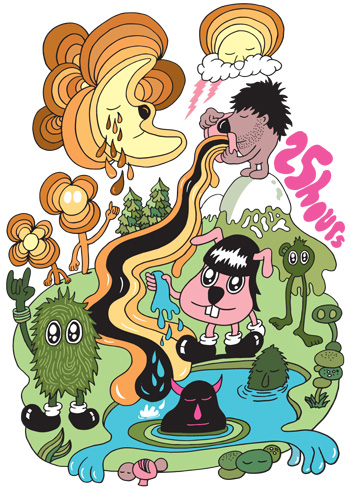 I’ve always seen you as an illustrator / vinyl toy designer, but Jeremyville seems to be so much more, can you explain this?

For me it’s more about the idea. So the idea can manifest itself in any format or vehicle really, that best expresses what you’re trying to say. Sometimes it’s a simple haiku concept for a comic strip, other times it’s a t-shirt graphic, or a mural for an art show, or a 3D toy, or a sketchel collaborative project, or a book. I like keeping in mind the essence, what you’re really trying to say, then seeing how best to express that essence.

Of course you need to maintain your own distinct voice throughout, and that is the key point that I think some miss, if they try to do too much. I guess it’s like a musician being able to play several instruments, and each really well. It’s still the same musician and his or her music, but through a different instrument. But if a musician is only really good at guitar, they should stick to that. Thankfully I seem to be competent at a variety of instruments, and don’t really favour one over any other. This comes from practice, and enjoying the medium for what it is. I also love trying new mediums, for example I’ve been doing a lot of animation recently, eg for MTV, and this is a new medium I love.

Or maybe I’m just mad. It really could be as simple as that.

When the Jeremyville and Megan Mair’s book Vinyl Will Kill! got published, what effect did it have on your career?

It was really a big international calling card, and a big commercial success, and I still get about 5 emails a day from say someone in South Africa or Iceland who has just bought the book and tells me they love it. It’s a great starting point for someone getting into toys, or writing about it as their university project. That has been a big group I hear from actually. It is still having repercussions internationally, and my publisher IdN is doing a new book with me now, out in November, called ‘Jeremyville Sessions’, all about the process of collaborations with 300 artists and companies. IdN were thrilled at how Vinyl Will Kill went, and it’s still going.

When you were cartooning at the Sydney Morning Herald, did it ever think you would be in the position you are now?

I always new if I got the humble cartoon right it could take me far. The cartoon is like shorthand for me, the simplest way to get an idea across. Like a chef making a simple omelette. A great chef can make a perfect omelette, even though it is very simple, it takes nuance, timing and restraint. Like a simple cartoon with 8 lines that convey a mood. It is a lot more difficult than it looks, and it is as much about what you leave out as put in.

In Australia there is a sweet called ‘Minties’ by Nestle, and on the wrapper are very small cartoons that I have been drawing since about 1994. I’ve drawn about 300 all up by now, and they are still on there. It is probably the most haiku I’ve ever got. They really need to say so much in about 3cm!

You did a Computer Arts cover recently and so did Jon Burgerman. Out of you and Jon, who do you think got paid more?

Ha-ha, I’m not sure how much Jon got paid, but personally the money I received for it wasn’t even a factor, rather the honour of doing it, and the fact that I was the first Australian to be on the cover! They are also really great to work with, I mainly dealt with Roddy, he was an absolute pleasure to work with, and he did a great job on all the components of my art in the magazine. I was really proud of the result, and it was a dream brief.

One of my first solo shows was at Bunkamura Gallery in Shibuya, Tokyo, as well as many others, and group shows such as at Reed Space in New York, Trust Nobody in Barcelona, an upcoming group show in Gallery Lele in Tokyo, a recent show in St Petersburg, lots of others, but right now I’m concentrating on finishing my book, and then several other big projects on the go. I have a few more group shows coming up.

What’s next in the pipeline for Jeremyville?

Sketchel 2 is on the go, (Apefluff is in series 2!) plus more animation projects, the ‘Jeremyville Sessions’ book, new t-shirt designs for LEGO, designs for Yoyamart in New York, designs for Pabobi snowboards in Switzerland, comic strips for Fused Magazine in the UK, a 10 inch Jeremyville toy coming out through Red Magic’s Love Original project, a 10 inch Trexi, a mobile phone arcade style game, the new Jeremyville Circus Punk through STRANGEco, stuff in a comic book anthology, a compilation DVD in Japan, and a toy I’m designing for an Italian racing car driver… a fun gig!

But I’m also running a lot as spring has come to Sydney. I’ve been spending a lot of time down at Bondi, and swimming and kayaking around Sydney Harbour. For me, health is as much fun as creating stuff, and as important. Health, love and friendship.

I absolutely LOVE anyone who enjoys what I’m trying to do, and shows appreciation for my stuff, it is the best thing in the world, second to actually creating it!! So shout outs to anyone who visits Jeremyville and spends some time there, thank you so much! And thanks to theApe for the interview, your site is really cool and I’m proud to be a part of it! I dig your style!

I also have a lot of respect for fellow illustrators who are doing their own thing, and getting their work out there. I know how much of a lonely challenge it can be, and I feel a strong affinity and empathy for people on that path. Rock on dudes and dudettes!

Both and many, many more!! 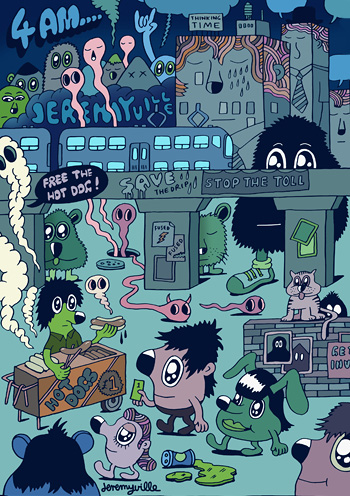 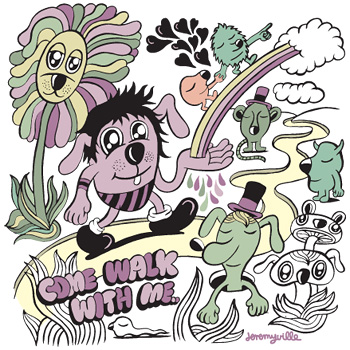 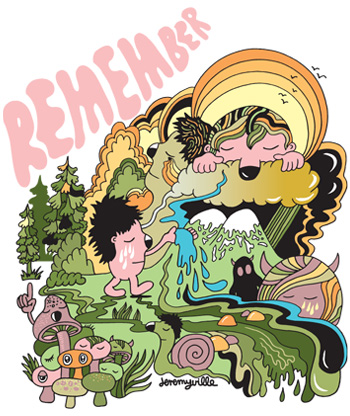 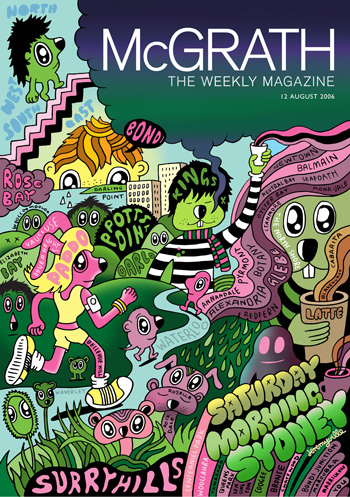 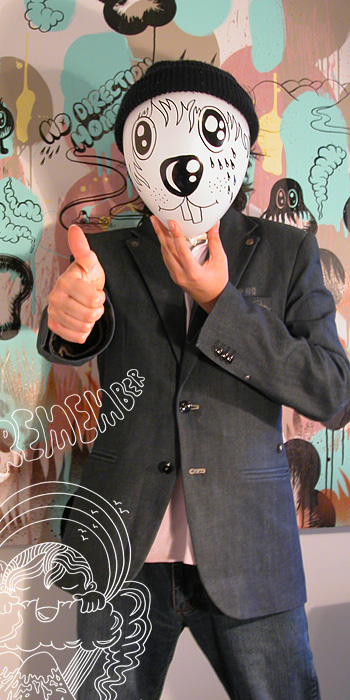