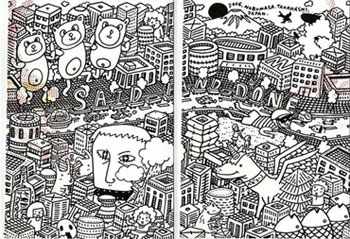 How did you come up with idea for the Said and Done collaboration project?

KOOP: The idea somewhat stemmed from two different places. In 2002 I tried to do a small book of artists sketchbook work titled precursor, I had the book designed and ready to go but there was no money to get it off the ground. I then moved from Calgary to California for a year to art direct Skateboarder Magazine. In that time John Antoski created aproject titled cherry bomb and it was the same idea as Said and Done but with friends from our art school at ACAD (Alberta College of Art and Design). The prints were scannedand made into a book, (one book unfortunately). So after a year I moved back to Calgary and we teamed up to do a bigger and better version of cherry bomb.

JOHN: yup I remember Precursor, I think I had some work in it. The initial idea of Cherry Bomb, was a way of uniting the artist community at acad, as well as push my own creative outlet. Cherry Bomb was different as once the prints were returned to me, I would work back into them, developing the composition until I felt it was successful. The result was a pretty polished series of one off prints. I Learned a lot from each artist and developed better understanding of what could be achieved within my own work. Koop returned to Calgary the next year, having worked on one of the first series of prints, and was interested in continuing the project. This time we developed the prints together, deciding on placement, patterns, color, yadayada… I wanted to keep the purity of the collab and chose to not alter the prints after they were returned. Thus Said and done was created.

This is project number 2. How successful was the first one?

KOOP: Like I said before, the project John did titled cherry bomb went well within the art community, but that is as far as it ever went. Our goal was to push our self’s to get artists from around the world and advertise as much as we could with a budget of $0, that takes creative thinking.

JOHN: yeah Cherry bomb was pretty exclusive to my own community, I thought that would be a great start, seeing how segregated It had felt at the time. The book and selected prints were shown a couple times, with good reception, but really pale In comparison to the second project. It wasn’t until Koop and his networking mastermind combined with his A.D.D that the full potential of the project was realized. The website played a key roll in the project’s success and continues to, but It’s really the acceptance of the creative people out there that are down for whatever, that make us so proud of this project.

Which S and D print is your favorite so far?

KOOP: Thats like a mom picking her favorite kid, ha ha ha. I have many favorite prints, the prints that are my favorite are the ones you can tell that allot of time and energy had been spent. I do have a print that wont be going up for a while that was done by Aaron Horkey that is nothing short of amazing, he is pretty much a master painter, I needed a magnifying glass just to see the brush strokes.

JOHN: yeah that one was well worth the $89.00 in shipping fees. I however, lean towards the prints that use the suggested patterns and colors to fuel their composition. These artist are able to adapt and be flexible, a true skill and talent. As far as a favorite, Im with Koop, any one of them are brilliant in their own way. I would be happy to have anyone of them on my wall.

Who are your favorite artists alive today?

KOOP: Thats a great question, a lot of them are involved with our project. I have been influenced by artists and designers since I was 7 and started to skateboard. So allot of my influences for the past 20 years or so have been Ed Templeton, Andy Howell, Natas Kupas, David Carson, Martin Venezky, Barry Mcgee, Randy Laybourne, Sean Cliver, Don Pendleton, Kelsey Brooks, Ben Tour, Rod Henderson, James Jean, Marco Cibola, Michael Sieben, Mr. Cartoon for his jail-house typography. Dan May, Robert Crumb, David Choe, Pushead, Ben Frost, Pushead, Neckface, Banksy, Brian Gaberman, Jeremy Fish, Jose Parla, John Pound ( did the Garbage Pail Kids) and local artist such as John Antoski, Josh Holinaty, Ben Jaques, Mike Carter, Sam Webber, Chris Millar. That does not even skim the surface but it gives you an idea, sorry for giving you 8 years of crap to read?

JOHN: we pretty much made a list of about 200 or so artist that we wanted to be involved with Said and Done, a wish list I guess. The funny thing about it is we got a bunch of em. Goes to show how open artist are about an idea. So without repeating Koops list that I totally agree with I will elect to name drop some more. Marcel Dzama, Matt Greene, Anna Sigmond Gudmundsdottir, Dr Lakra, Ricardo Lanzarini, Julie Mehretu, Poris Walker, Jockum Nordstrom, Ernesto Caivano, Amy Cutler, Mars 1, Kinsey, Clayton Brothers, Ryan Mcginness, ghostface killah, some locals include, Rick Gorenko, Don Kottomann, Chris Cran, Kaiti Pasqualotto, Phill Revard, Daniel Ducheck, Maraigold Santos. If your name isnt on this list dont fret, you know your dope. Ok

Who have you worked for and what jobs have you had?

KOOP: I was asked to move to California in my 3rd year of art school to become the art director at skateboarder magazine. Before that, I worked at radio shack and Chapters; I would rather be on welfare than work retail. I need to be creating in order to feel somewhat satisfied, whether it be working construction and building a house or painting.

What’s in-store for the S and D project?

KOOP: The project has grown leaps and bounds from what we had expected. We are hoping to show at as many galleries around the world, but due to how large the show is, we now need financial support for shipping. Since we have nothing to sell, the private galleries want nothing to do with us. So we need to approach artist run galleries that receive funding from the govt. So we are in the midst of writing proposals. We also are interested in doing a book.

Is there going to be a S and D 3 for all the hundreds of illustrators and artists who couldn’t get involved this time?

KOOP: John and I were just speaking about that, and yeah I think it would be a great idea, I love seeing artists that are mind blowing that no one has ever heard of. I have already started a list of artists that I want for S and D 3, I just want to get this project off the internet and into some great spaces for the public to see.

JOHN: I think that the beauty to the title of this thing. When will it ever be all Said and Done?

What’s next in the pipeline for you?

KOOP: I have a few projects on the go at the moment I am working with friend Mike Carter on a TV show, it will be like nothing you have ever seen. And I am finishing the last year of my degree up. I hope to have Said and Done touring the world by April 07′

KOOP: Shouts out to everyone involved with the Said and Done project and to everyone that has supported us. Big ups to Apefluff for creating and hosting version 2 of the said and done site, we really appreciate all the hard work that is being put into it.

JOHN: everyone involved, you all are awesome, thanks for participating, koop thanks for being so down for the cause, Apefluff for the site, wu-tang for your beats, and my mom for birthing me.

KOOP: Concrete for sure, Johns a pussy so he will probably say snow, ha ha ha. 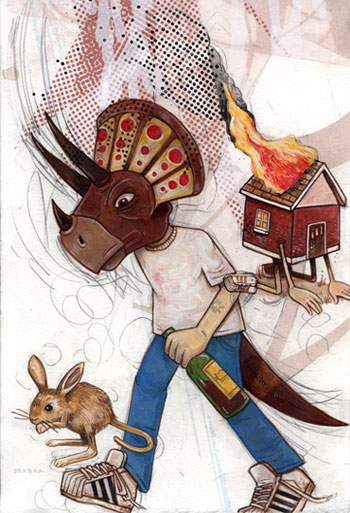 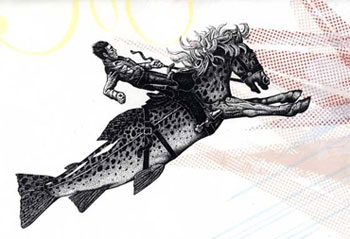 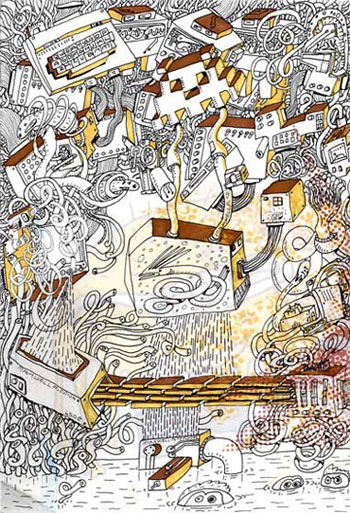 You can see more prints and join
the Said and Done forum at
www.saidanddone.ca