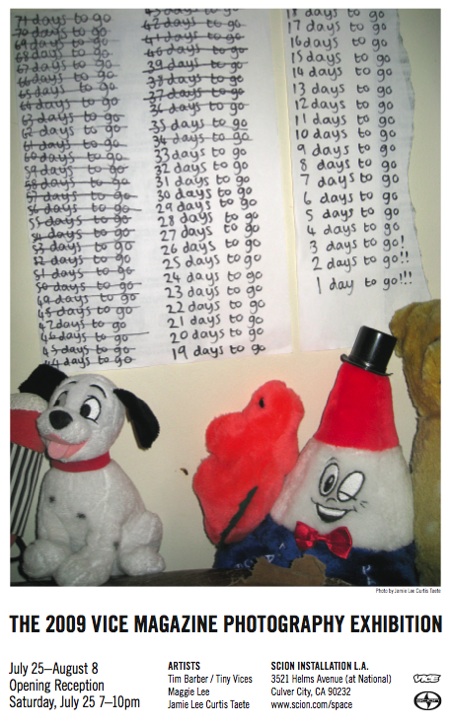 Vice, the international arts and culture magazine distributed and published in more than 22 countries, comes to Scion’s Installation L.A. Gallery on July 25 for the ninth annual Vice Photo Show.

Jamie Lee Curtis Taete is a 24-year-old English photographer whose candid images provoke intense reactions, often ranging from awe to disgust.  His work has been featured in Vice, Chief, PerezHilton.com, and The Guardian, and has been shown in Mexico, France, Britain, North America, and Japan as part of the Tiny Vices traveling exhibition.  Taete is a Vice UK staff photographer and maintains a photo blog at www.jamietaete.com.

Maggie Lee is a zine-maker, Pratt graduate, and Vice staff photographer who has developed a chronological archive of her 21 years through captured light and photocopies.  Lee has shown her work in New York, New Zealand, and Australia and  recently exhibited her Frenching zine at the New Museum’s “Younger Than Jesus” show.

More information on this and previous exhibitions is available at www.scion.com/space.

The opening reception takes place on July 25, 7 p.m. – 10 p.m. at the
Scion Installation L.A. Space, 3521 Helms Ave. (at National), Culver City, CA 90232.  The reception is free with complimentary valet parking and an open bar.  All artists will be in attendance and Vice Photo Issues will be available at the event.  The exhibit will run until August 8, 2009.