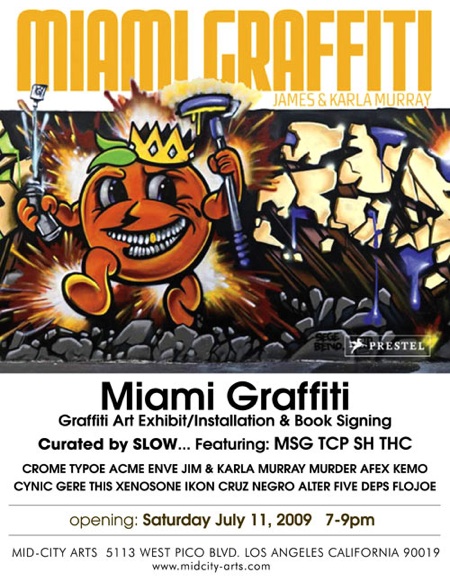 Rapidly becoming one of the United States’ top graffiti destinations, Miami, Florida is home to a deep well of talented artists driven by a fiercely competitive graffiti scene. Miami's profile has risen thanks to the city's role as host to the famed “Art Basel” and most recently “Primary Flight.â€ â€œPrimary Flightâ€ is the internationally acclaimed, site-specific, street level mural installation that takes place during Art Basel. Artists that have graced the Primary Flight walls include Crome, MSG, Typoe as well as Blek Le Rat, Retna, El Mac, David Choe, Revok and many others.

Miami Graffiti by photographers Jim and Karla Murray is the first book to capture Miami's graffiti scene. Documenting 20+ years of graffiti art and history along with Miami’s most notorious crews and writers, Miami Graffiti is a detailed presentation of South Florida’s past, present, and future of graffiti.

Mid City Arts' “Miami Graffitiâ€ show is a celebration of the release of Jim and Karla Murray’s book â€“ they will be on hand to sign books – and a showcase of some of Florida's finest street artists from the MSG, TCP, SH and THC crews. Artists from these crews are coming out to Los Angeles and will be displaying their work in the gallery as well as customizing the gallery's back yard space. Featured artists include Crome, Typoe, Acme, Enve, Murder, Afex, Kemo, Cynic, Gere, Flojoe and others. The show is curated by â€œSlowâ€.

The MSG crew formed in 1994 by a group of kids bonded through their shared street backgrounds and love of graffiti. Now, 14 years later, MSG has evolved into a creative collective that has expanded into everything from graphic design and fine art, to retail and product design, and everything in between. South Florida's Crome is one that region's graffiti pioneers. Crome's work is an amalgam of sex, color, crime and fun. Drawing inspiration from Miami's clashing of tropical South Beach & seedy underbelly of Downtown Districts, he creates images that reflect the dichotomy between the beauty, style and color of the former, while balancing it with the images of prostitution; drive bys and drugs of the latter. Crome is multifaceted and multi-dimensional. He's an artist with a dark past and a bright future making his mark on the vanilla, superficial Miami art scene. http://www.midcity-arts.com