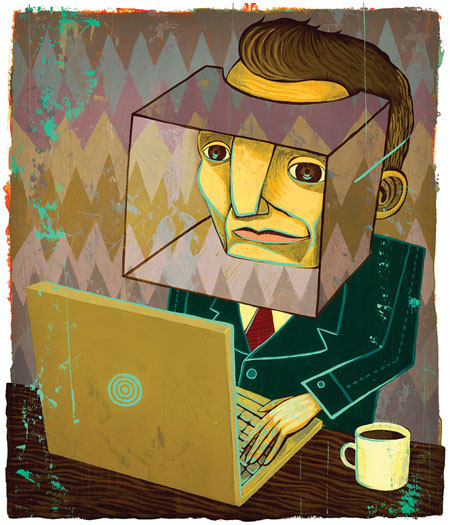 Doug Boehm is a professional freelance illustrator and fine artist. His illustration work has been published in magazines and newspapers across the US, some of which include: Time Inc., The Village Voice, Rolling Stone Magazine, Seattle Weekly, and PC Magazine. He has been published in several other countries includingÃ‚Â Australia, Canada, Taiwan, and Costa Rica. Doug has also illustrated for ad campaigns, music packaging, consumer packaging, and is always looking for new venues for his work.

Doug has shown his work in several galleries and has been collected in the US, UK, Australia, and Taiwan. 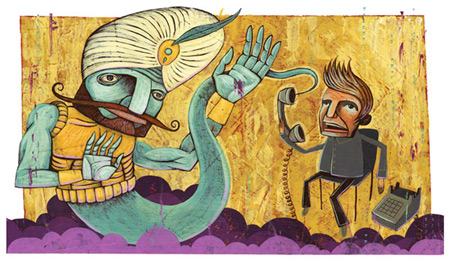 Did you know ‘Go Home Bud’ was an anagram of ‘Doug Boehm’?

I never really thought about that. Thanks for pointing that out. I will name my first born, “Bud”. Another fun fact about my last name is that it’s pronounced, “Bame”. Yes, the “oe” equals a long “a”.Ã‚Â

I suppose I’m an illustrator who dabbles in fine art but most of my fine art follows some kind of story line.Ã‚Â Lately I’ve been trying to blur the edges between my illustration and fine art.Ã‚Â I’m not a illustrator who would rather be a painter, I’m passionate about both.

How much are you worth now and how much do you think you’ll be worth in ten years?

It’s not worth mentioning. But if pressed I would say I’m currently worth between $1 and $5.2 million. That should give you an idea. In ten years I plan on wearing a top hat and will walk the streets with my solid gold cane. The neighborhood children will have a constant supply of toys and candy.Ã‚Â 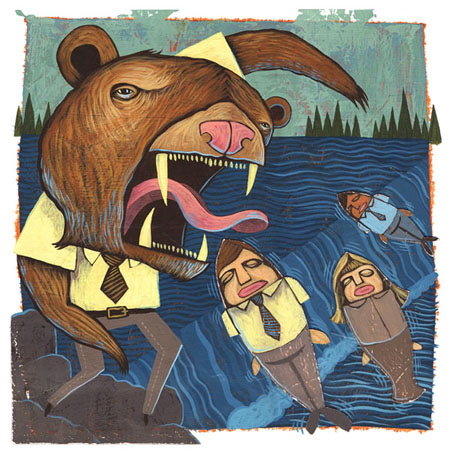 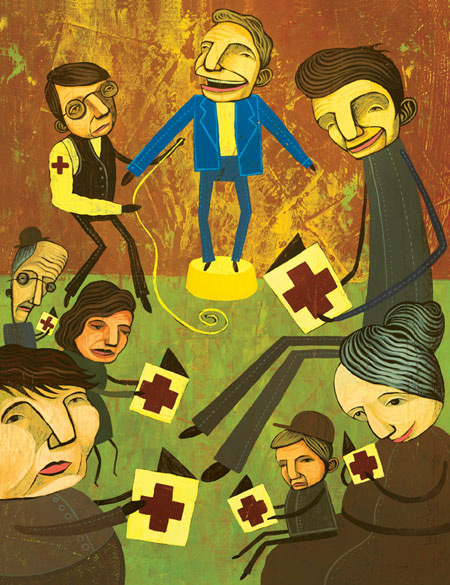 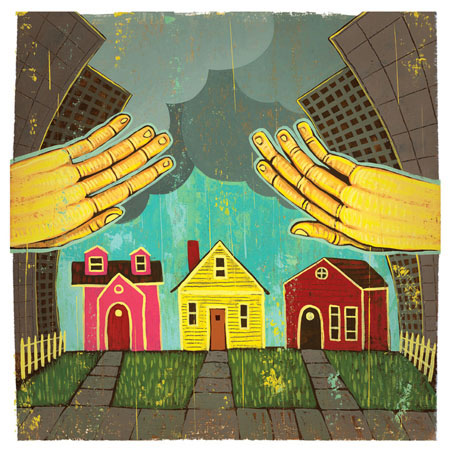 In addition to sitting around thinking about what I will be worth in ten years I also like graphic design, playing guitar from time to time, listening to music, fishing, traveling, drinking wine, making wine, talking to my cats, and hanging out with my wife. Life is good.

A few of my illustration inspirations are Sue Coe, Dennis Corrigan, Henrich Drescher,Ã‚Â Rich Borge, Melinda Beck, andÃ‚Â Charles Burns. I also like several illustrators that are closer to my age such as; Mario Zucca, Colin Johnson, Danny May, Tim Gough, Jon Krause,Ã‚Â Aaron McKinney, The Heads of State, Jude Buffum, Mutt Ink, and James Jean. Some of my favorite artists would be Jesse Reno, Robert Hardgrave, Kevin Titzer, Chris Mars, Andy Kehoe, and Jim Houser. I love lots of different kind of art so my list should be much longer.

At a guess how many primates have you drawn in your professional career?

I think I’ve painted about 20 in the last couple years. My main ape characters are titled, “Stereo Friends”. I started painting them as a metaphor for the perfect relationship. They rely on each other which brings out the true nature of both, much like a marriage or friendship. 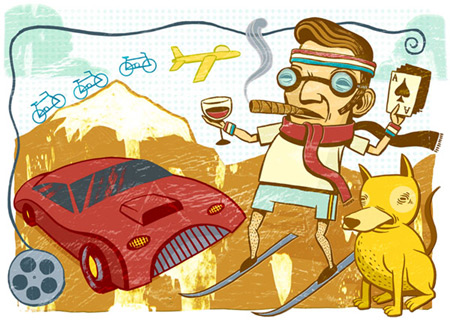 Have you ever considered animating your work or having someone animate your work?

I don’t have the patience to animate my own work but I would love to collaborate with someone on such a project. I’m working a personal side book project that I would love to see animated at some point.

It’s been a dream of mine to have a show in Tokyo. I’ve never traveled there but it’s always on my mind. I would show up to the opening in a purple helicopter. It would be a sold out show. People would feed me sushi and rub my feet with warm towels. I wouldÃ‚Â miraculouslyÃ‚Â speak fluent Japanese and everyone would be joyous. Bill Murray might even show up. 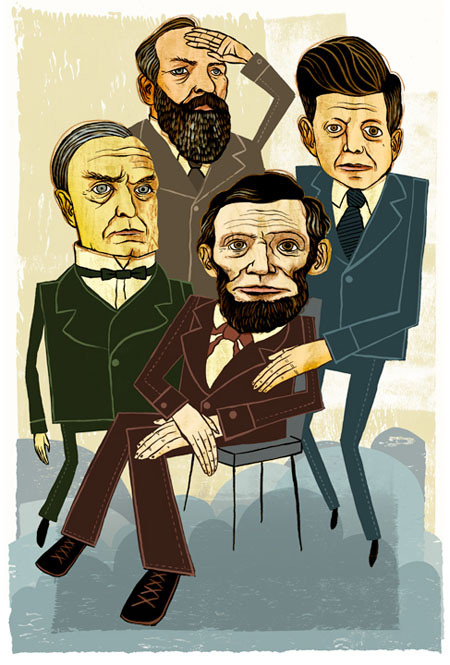 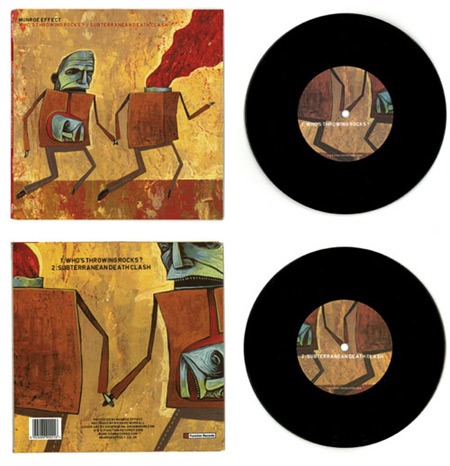 Why is your MySpace profile private, what are you hiding?

I had issues with myspace for a while. I really love flickr though. I feel like I’m going to get cooties every time I’m on myspace.

I’m not collaborating with anyone at the moment. I’d love to collaborate with someone who can sew. We’d make puppets, hand bags, and pillows. I don’t have anyone in particular in mind. I would be interested in doing a film with puppets rather than animation. I guess I would prefer collaborating with people that do not necessarily paint. However, I’m always up for a goodÃ‚Â exquisite corpse.Ã‚Â

What’s next in the pipeline for the Doug Boehm?

In terms of illustration, I usually have an editorial assignment in the works and plan on keeping up with that.Ã‚Â I’m in two group shows this month on in Seattle, WA and one in Portland, OR. Visit my blog for details. I’m also taking part in a group show in San Diego this December. In March I will have my first show in New York City.

Iron-Man or the Hulk?

Hulk Smash! I did enjoy the Iron-Man movie though. 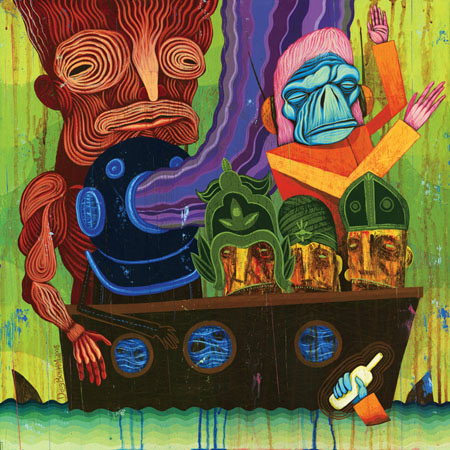 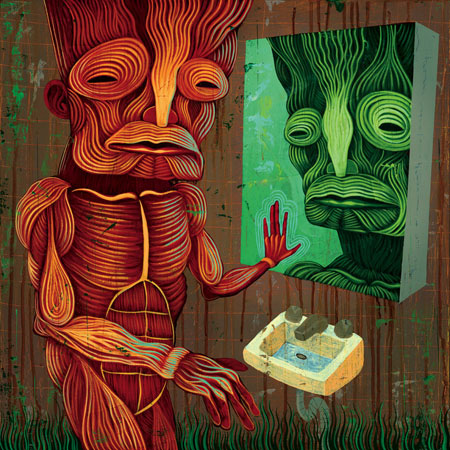 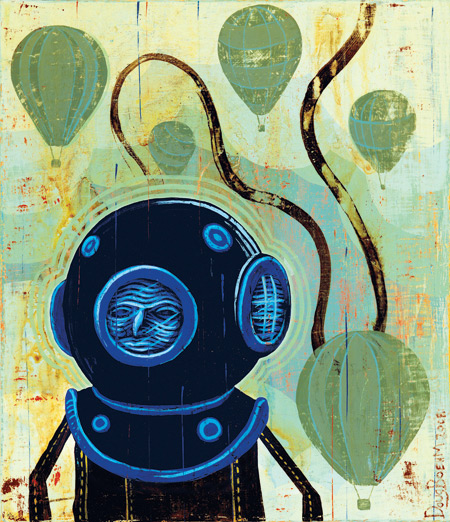