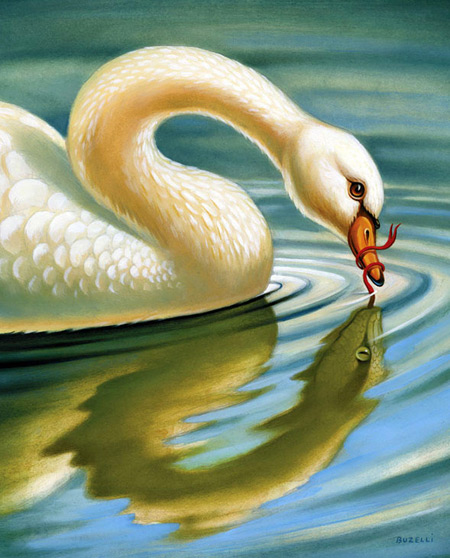 Chris Buzelli was born and raised outside of Chicago and on the waters of Lake Michigan. He was influenced by his Grandfather Armondo Buzelli at young age, painting side by side in his television repair shop. After graduating from Rhode Island School of Design, Chris moved to New York City to start his career as an illustrator. His oil paintings have appeared in many publications including Rolling Stone, TIME, Playboy, New York Times and LA Times. Chris has collaborated on numerous projects for design firms and advertising agencies. Some recent projects include a poster series for the Tropen Museum in Amsterdam commissionedÃ‚Â by Saatchi and Saatchi,Ã‚Â a wine label for St. Supery, a Fun-Wall card for FacebookÃ‚Â commissionedÃ‚Â by McCann Erickson and an ad campaign for United Airlines/Olympics commissioned by Arc Worldwide. Chris' work has been recognized by American Illustration, Society of Illustrators, SPD, Communication Arts, Print and 3×3 magazine. He also shows his work in various exhibitions and galleries throughout US. Chris lives in NYC with his wife, SooJin, and mini-pinscher, Sota.Ã‚Â 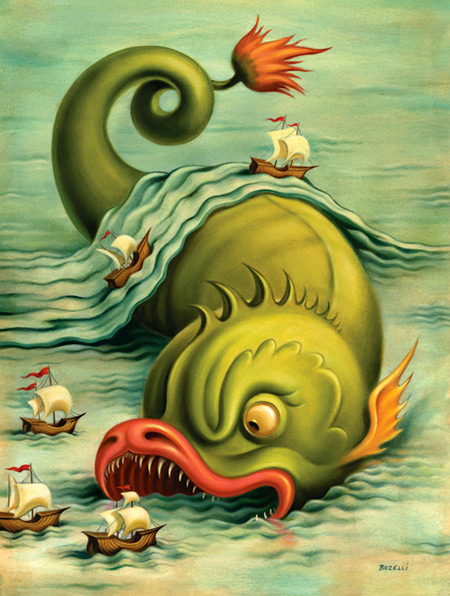 Do you consider yourself to have a commercial style?

I think my work drifts into the commercial world and the fine-art world. It’s great to live in a time when you can participate in both worlds.

Do you feel regret when you sell an original painting or is the payment compensation enough?

At first, I was so precious about my work, I wouldn’t sell anything. Now, a bunch of old paintings are collecting dust in a box under my bed. Recently, I’ve been selling almost everything in galleries, through my web site and at illogator.com. I know when the price is right if I’m comfortable in parting with the original. However, I do hold on to few of my favorites.Ã‚Â 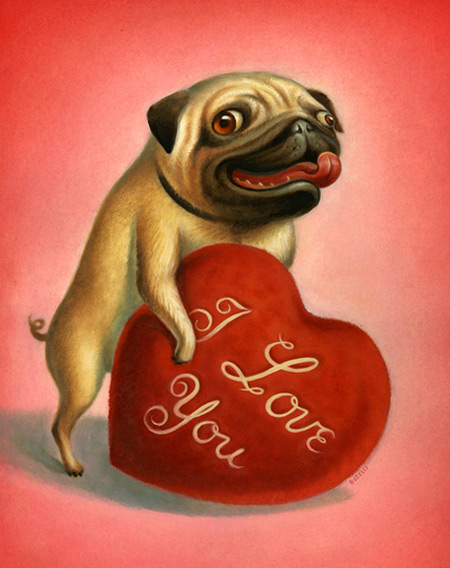 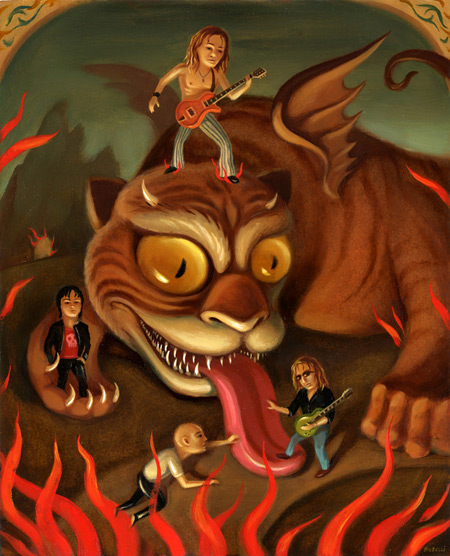 How much has an agent helped you career?

I’ve had two agents in my career. The first was very corporate and I was doing a lot of collage paintings of business people flying on rocket ships with brief cases. This agent was a big help in changing my career. After about 5 years of successfully starting a career as a corporate editorial illustrator, I drastically changed my focus, almost over night. I decided no more collage and justÃ‚Â focused on drawing and painting of subjects that I wanted to paint. My work with that rep slowly declined and I stuck with my new personal direction despite the rep’s constant doubt about my new focus. I’m now with Jen Vaughn Artist Rep. She’s really great! I get about 90% of my own work but she gets some really unique jobs. Some recent projects were an Ad/poster campaign for United Airlines and the 2008 Olympics, a greeting card for Facebook, collaborating with Mark Murphy on an ad campaign for Serbin and series of billboards/bus wrappers for the Seattle Woodland Zoo. Ã‚Â 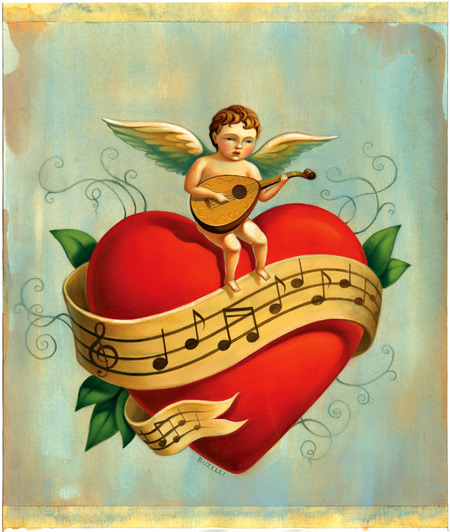 Just the normal stuff. Walking around NYC with my wife, SooJin and our mini-pin, Minnesota. Fishing on the boundary waters of Minnesota. Visiting my family back in Chicago. Hanging out with my 4 sisters. Hiking in the Catskills and getting lost in the woods. Cooking, mainly grilling, for my friends. Ping Pong. Basketball. Snowboarding.Ã‚Â

There are so many great and diverse illustrators alive today. I can’t possibly name them all. Here are a few…… 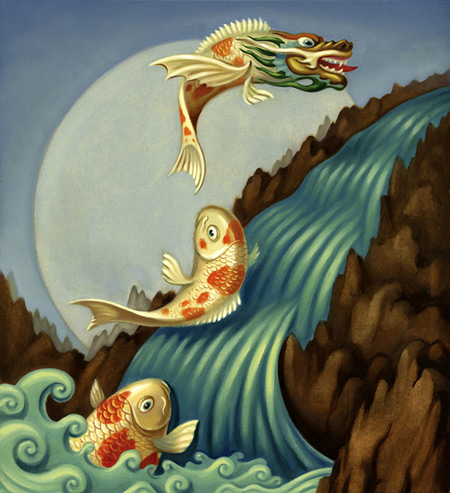 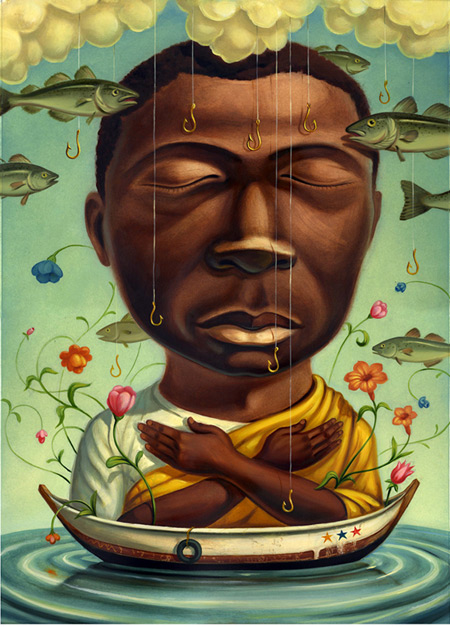 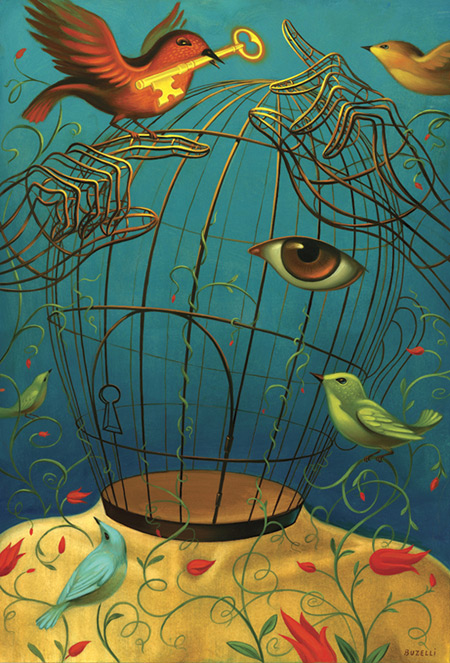 Have you ever worked for your wife?

Of course. She was the one who kept me going in the beginning of my career when jobs were scarce. She is the Creative Director of Asset Intl, a publishing firm with a couple of beautiful magazines, PLANSPONSOR and PLANADVISER. I think she has really pushed the boundaries of editorial illustration.Ã‚Â

I just showed at the Robert Berman Gallery at the Bergamont Station in Santa Monica, CA. It’s a perfect place to see a wide range of galleries in a unique and comfortable setting. Also, one of my favorite galleries is Varnish Fine Art in San Francisco, a great space to hang out and grab a drink. One day I’d love to show at the Jonathan LeVine Gallery in NYC. 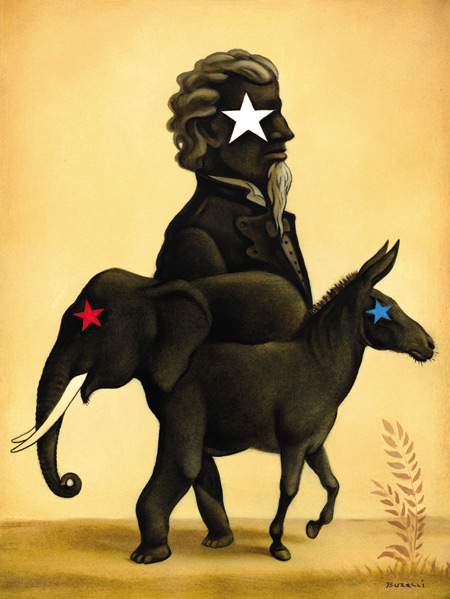 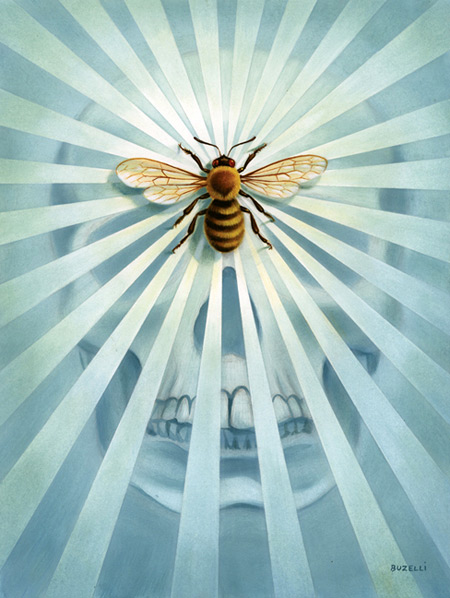 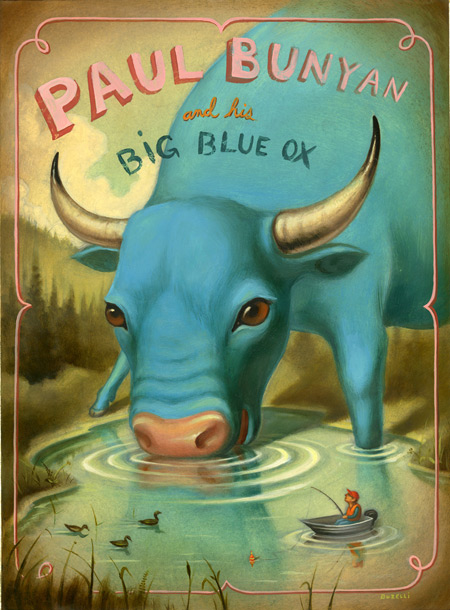 I just finished working with Saatchi & Saatchi in Amsterdam on a series of posters for the Tropen Museum in Amsterdam. It’s an amazing experience to work for a museum. The museum acquired 5 new artifacts and wanted an illustration for each. They flew me out and the posters were everywhere, on the highway, in the subways, bus-stops and on huge banners in front of the Museum. I felt so overwhelmed that a museum would want my work to represent them. If you get a chance visit the Tropen. It resembles a giant Harry Potter Castle and is full of amazing artifacts from the early Dutch explorers. I’d love to work on more projects like this. I’ve always wanted to do an art book or some type of movie/animation production work.Ã‚Â

Have you ever considered branching in motion graphics or animation?

I’ve collaborated on a few animation projects, where my paintings were animated. But nothing noteworthy yet. I hear my Koi painting for United is animated for the opening screen on their flights. 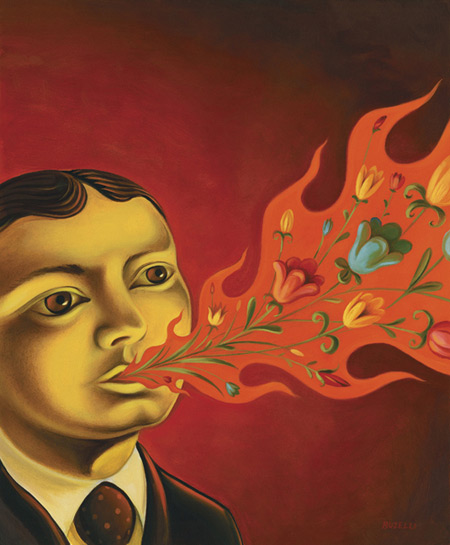 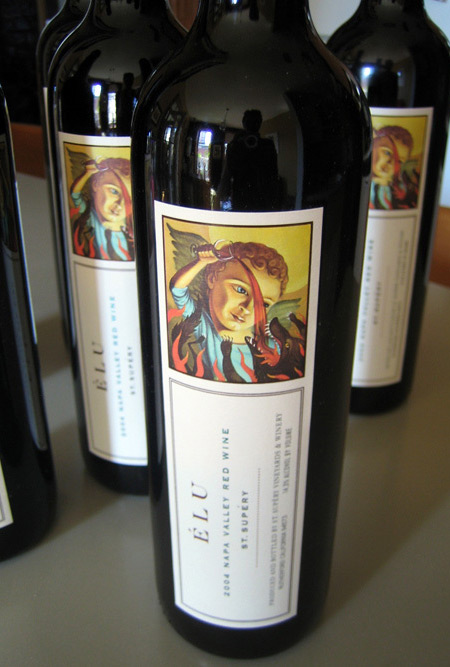 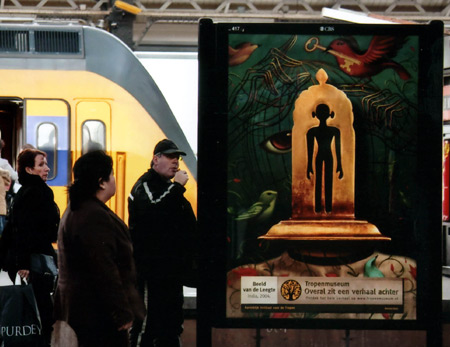 What’s next in the pipeline for Christopher Buzelli?

I just missed a job illustrating the 7 Wonders of the World for a high-end underwear company. Not sure what’s next. Recently, I couldn’t have dreamed up some the the incredible projects that I’ve been given. I hope the good times continue.Ã‚Â

Cheese or beans on toast?

Nothing better then a grilled cheese sandwich.

My wife loves the Harry Potter books. I just don’t get it. Too many descriptive names and places.Ã‚Â
I wish I kept my child-hood collection of Transformers.Ã‚Â

I’ve worked for both, so I have to be careful on this one.Ã‚Â I really only look at both for their illustrations. Really! 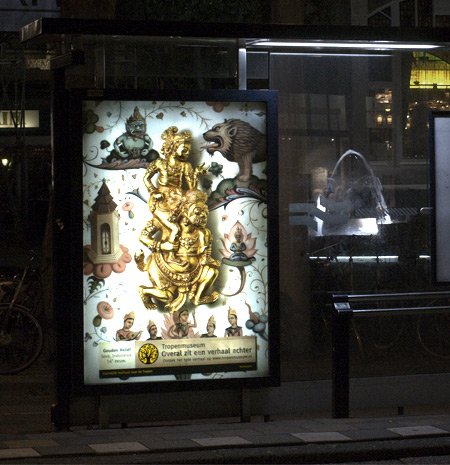 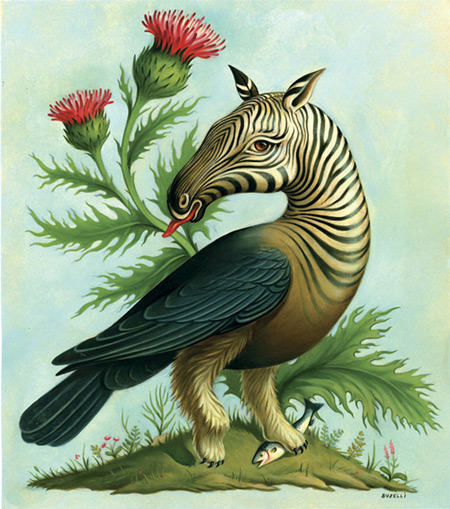 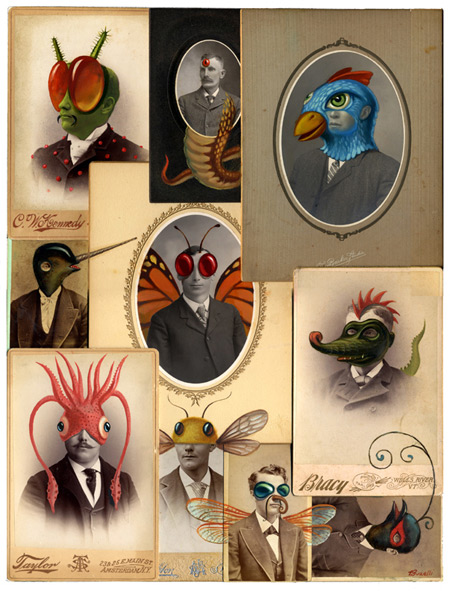 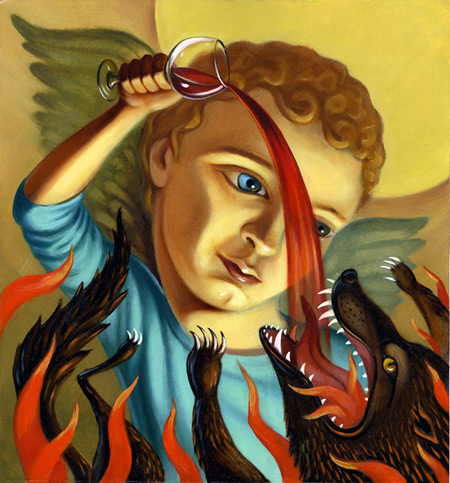 You can see more of Chris Buzelli’s work at
www.chrisbuzelli.com