How influential was Bob Dob in regards to your work when you were under his instruction?

Bob was an amazing instructor. Before he became a teacher of mine, I was working in acrylic and it was not working out for me. I thought I was just not a good painter and I was coming to terms with that. I even switched majors to photography for a while. Bob introduced me to oils and that changed absolutely everything for me. After that, I got it. It became a lot easier and I could stop struggling and focus on other things. I was able to experiment a lot more and without the frustration, I was able to relax and let my style just develop. I think naturally, I am drawn to rendering things more and I’m a sucker for detail.


You love museums – do you ever see your work being displayed in one?

Gosh. I kind of feel pretentious if I say yes and self deprecating if I say no. I would hope so. The museums that I love mostly are natural history museums and science museums. I would love to do a mural at a natural history museum in the Children’s’ section. Not exactly the same as having your work in some ornate frame on the wall of a contemporary museum, but I think the kids would appreciate it more.

I know this answer is quite obvious, but I’m really into animals. We try to get out to aquariums and nature reserves and even the zoo (though I hate to admit it- it’s getting better I swear) as much as possible. When we’re home we watch a lot of Animal Planet and my house is literally overflowing with books and magazines about animals. I wish I could say there’s more to me but I can’t really think of anything else that I’m really into.

As far as technique, I really like a lot of nature artists. Glen Loates and Peter Schouten are a couple of my favorites. I also really like Mark Ryden (obvious, I know), Kris Lewis, Jonathan Weiner, AJ Fosik, Audrey Kawasaki….

How important is your family to you – are you able to support it with just your income?

My family is extremely important to me. They are what led to me doing this. I really wanted to be able to avoid going to a nine to five job in order to stay home with my kids. My husband pushed me to go to art school and still supports me to work even though it means him having to cook (or mostly order) a lot of dinners and change a lot of diapers. I couldn’t support us with just my income- there’s a lot of us, my husband and I, two kids, a baby on the way, a dog, some lizards, some fish, and our owl. It’s a full house.

I’ve read before that you don’t like sketching. How do you produce your paintings, is there no concept stage?

Yeah. I really hate sketching. I work out the concepts in my head mostly. Sometimes I do a drawing and then transfer it to the wood, but most of the time, I’m impatient and I just draw directly onto the wood and paint over that. It really is impatience that drives this, I don’t pretend for a second that I am this artsy artist that the painting just flows from me. I just have trouble sticking with doing something when it involves too many steps. 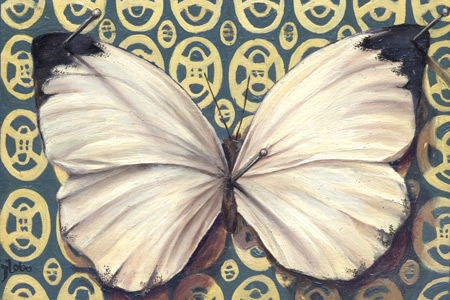 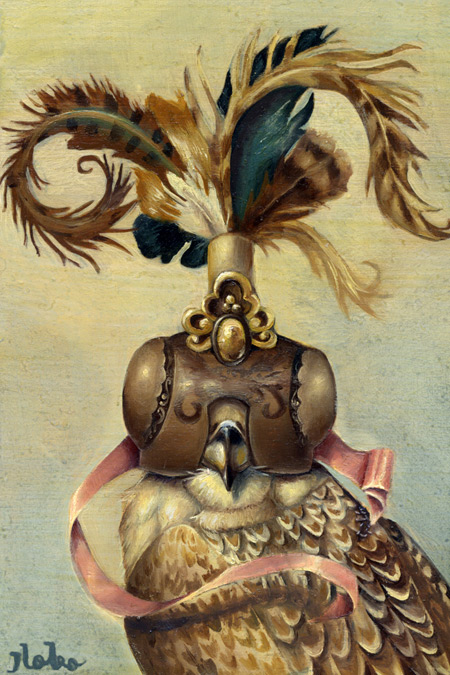 I’ve shown at little galleries around LA. Project, The Lab 101, The Academy, and Thinkspace. I have a solo show coming up May 5 at Magpie in San Diego. I would like to continue showing around here in LA. It seems like the best fit for what I’m doing. I hope to show at Black Market Gallery and La Luz de Jesus and eventually (fingers crossed) somewhere like the Billy Shire Gallery and the Jonathan Levine Gallery.

I’m not involved in any collaborations. I would love to do a painting with my friend Panni Malek. She does these amazing portraits of women, really intricate and beautiful. I think our styles would blend well. It would be fun to do something with the other artists that paint animals, too. I would love to do a project with Chris Ryniak or Tiffany Bozic. 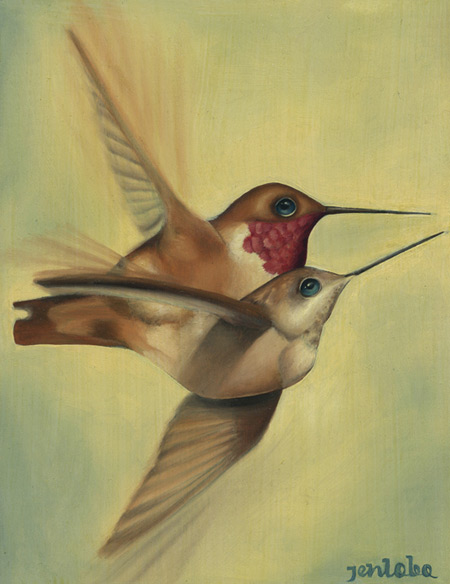 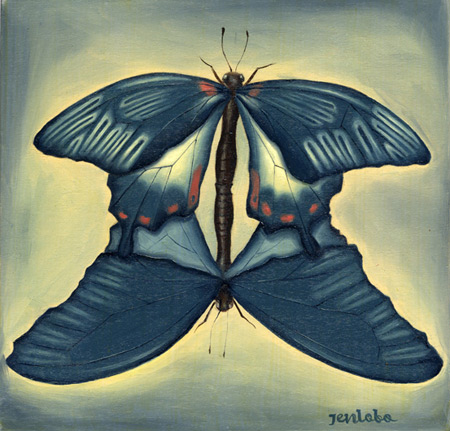 What’s next in the pipeline for Jen Lobo?

Right now, I’m focusing on this solo show coming up and a few other small shows as well. Recently I’ve begun to make an attempt to find some more editorial work, but the gallery stuff has kept me kind of busy. I’ve also been working on a children’s book, although it tends to get pushed aside a lot. I’m hoping to have that near completion by the end of the summer.

Oh. Just one more question. How is the one winged Barn Owl doing? Have you thought of a name yet?

The owl is doing very well. My husband built him a huge aviary in our backyard. He can’t fly (what with having one wing and all), so he mostly stays in his nest box. He is still a little weary of us, but he’s getting used to us. He can’t be let back into the wild because of his condition, but we’re trying to mimic his natural home as best we can. He still doesn’t have a name. It took us three months to come up with a name for our dog. 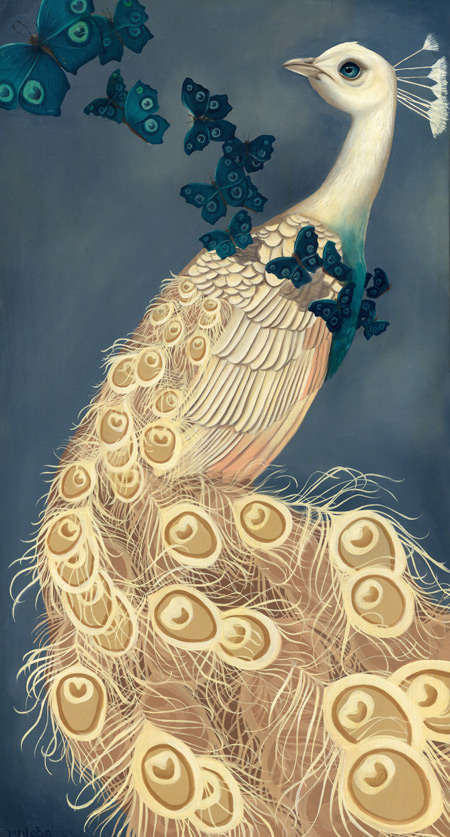 You can see more of Jen Lobo’s work at
www.jenlobo.com