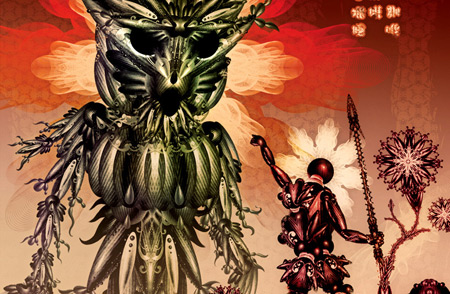 If you could not use a computer; would you be able to create the level of detail you produce in your work?

This is a great question. I haven’t been able to address this in an interview yet. My answer might turn into a little bit of a rant. You have my apologies in advance.

Here’s the short answer: No. I could not do what I am doing using traditional tools. I am not a masochist.


The long answer is: I have made an intentional effort to create a style that is unique, original and difficult to reproduce, while also being honest to my own creative leanings. The computer seemed to be the best medium to pursue this because it is still so new and so wide open for experimentation. I made a decision while I was coming out of my graphic design career to stick with digital media even though my personal illustrative/fine-art endeavours had always been with paint and/or pencil. While creating digital work for my design clients, I would often stumble upon some new process or technique in Photoshop or Illustrator that I would remember. I had a folder in which I would save screen grabs taken from any interesting results of processes that I discovered. This was really the beginning of that decision to stick with the computer as my medium of choiceÃ¢â‚¬â€œ it has always been an exciting thing to explore.

So, over the years I’ve been slowly building up my own bag of digital tricks. Most artists do this at some point with their chosen medium. This allows them to focus and perfect their skills in that medium, which means they neglect others. There is nothing unusual about this. Comparing the skill set involved in digital art with those of traditional media is almost like comparing photography and traditional art. Do people ask photographers if they could do what they do with paint? All three of these media involve very different tools. But they are all visual tools and compete for many of the same clients, buyers, viewers, collectors, etc. I will say, however, that digital illustrators still need to have an understanding of how to reproduce figures, objects, and environments with their tools, just as traditional artists do. That’s why knowing how to draw and paint can’t hurt. But I disagree with the attitude that a digital artist, for some reason, needs to prove him/herself by being able to paint. Skill and dedication are apparent regardless of medium.

And yes, sometimes I overdo it and have to remove things that don’t work; specifically, background patterns and border elements, although I haven’t been doing a lot of border work lately. 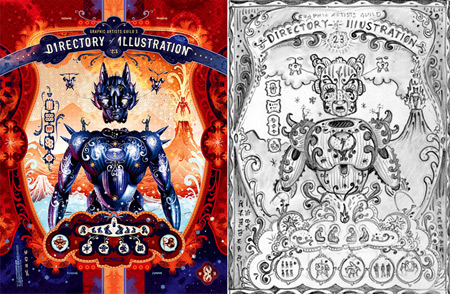 You have been accepted into the Communication Arts Illustration Annual twice, along with a number of other annuals. You have also been featured as a spotlight artist in MacUser, Computer Arts, Design Taxi and on Illustration Mundo, and to top it off in 2006 you were chosen as the cover artist for The Graphic Artists’ Guild’s Directory of Illustration #23. How the hell did all that happen with only 3 years as a professional Artist under your belt?

It has been a lot of hard work and risk. There was a time, right after the dot com crash, when my graphic design work became sparse. At that point I decided to reassess my career. I told myself, “Either you’re going to go for it or your not. What do you really want to do?” It was a simple, but risky answer: I decided to go for it. I had grown up drawing and painting, and had decided in high school that I wanted to be a professional artist. So I seized the opportunity. It was a bit of a struggle for a while. I spent several years experimenting and pinning down a style before I started to market myself as an illustrator. During that time I was still trying to pull in design work to pay the bills. Once I actually got my illustration work out there, it was still hard (even after getting into Communication Arts). My techniques were still evolving. My portfolio was limited. But I just ploughed ahead. I would create projects for myself if no client work was coming in. I built my own websites. I sent out promos… which, when I look back on them, were pretty bad. I also learned to be thrifty. It finally started to pick up when I was about a year into it. My work was accepted into a few more annuals. Then about two years ago I got a rep, which helped quite a bit.

What is the longest amount of time you’ve spent on a single image?

Early on, things took longer because I was sort of flying by the seat of my pants. I wasn’t totally solid with my techniques. I remember one of my personal pieces took about two months to finish once. But that’s not full time… So maybe one month full time. A client piece might have taken two weeks. Now each piece takes between two and ten days. But I’m planning on doing some fine art pieces this year that will probably take quite a bit longer.

I never call it a day on client work. I will stay up as late as I have to for a client, which is sometimes all night. Usually that doesn’t happen because I can tell, in advance, how much time something will take and plan for it. 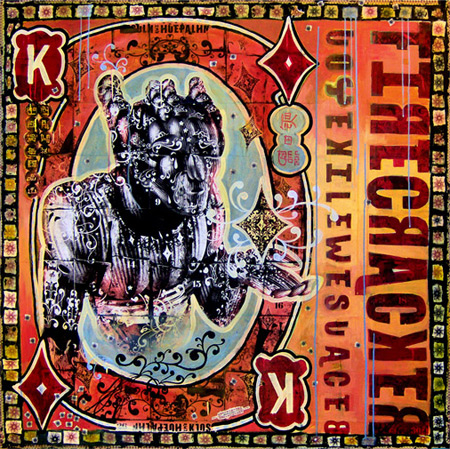 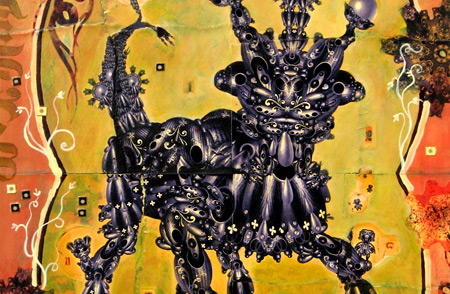 Apart from Art and illustration what other things are you into?

Surfing, fishing, camping, hiking, travelling, good food, beer, wine, music, hanging out with friends and family. And thinking too much. I’m sort of an armchair philosopher, as I think many artists are.

Doug Murphy (aka Plastic God) and I are coming up with a top secret collab. I’m also in the process of brainstorming with Erika Rand, a Berkeley based creative director, filmographer and designer, about a book project. And I am working on something with Aeron Alfrey.

I would love to work with anyone I just mentioned above in the last question.

Yikes, young grasshopper, what have you been smoking? What is the sound of one clam napping? You must have read my bio awhile back. But thanks for letting me inflict you with an answer. Feel free to laugh.

If you ask what is “Is” (which is what you are asking), or what is “being”, you will not understand the answer because the answer cannot be described, much less experienced, via language or rational thought as we move through this time-based “reality”. Existence does not need time and so cannot be fully understood from within time. Time wants you to think that everything must flow from A to B, but existence only needs A and does not necessarily “know” of B. So the question is, “What is A?” But we live in both worlds and cannot understand one without the other. We can conceive of it, but we find it difficult to experience it in its pure form, without time, and therefore “understand” it. (Which is a horrible word to use for such an irrational thing as existence.)

How’s that? I’ll come up with a completely contradictory answer tomorrow. By the end of the week both answers will be shaking hands and laughing at each other. 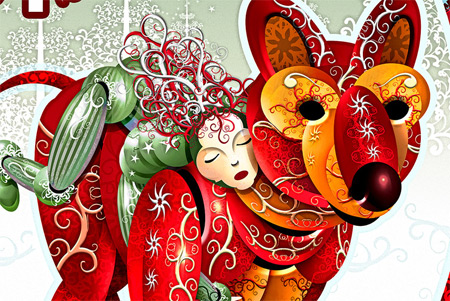 What’s next in the pipeline for Kristian Olson?

Mucho promotional effort this year, plus more fine art. I’m trying to really nail my mixed media techniques for the gallery scene. I might also be doing some very limited edition, strictly digital prints, like one of a kind, or two of a kind… something like that. They’ll come with a document that is signed and says that I will be put to death if I ever pump out any more. (You know… for the collectors.) I’m also thinking about doing some hand made books, or maybe a series of them. ALSO! On February 22nd, I, along with several other artists, will be signing limited edition Thundermutts at Munkyking on Melrose.

I’ve seen both, but I only remember the first one. So it must have been better… or maybe I was just in a better mood for the second one and that’s why I don’t remember it.

Raw fruit. Cooked veggies… except for lettuce. Lettuce should only be eaten raw. Oh… and jicama should be raw… or supposedly boiled, which I have not tried because it sounds awful. 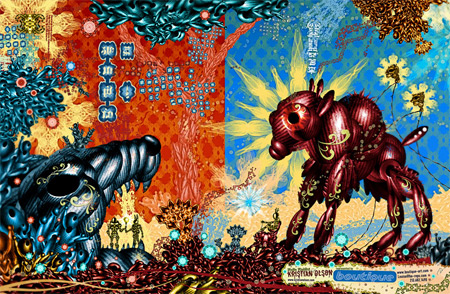 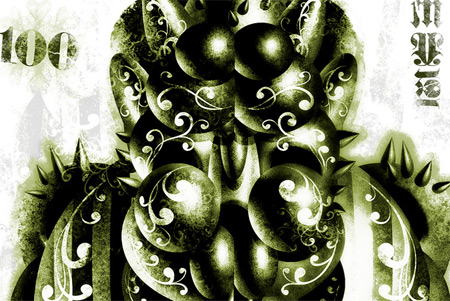 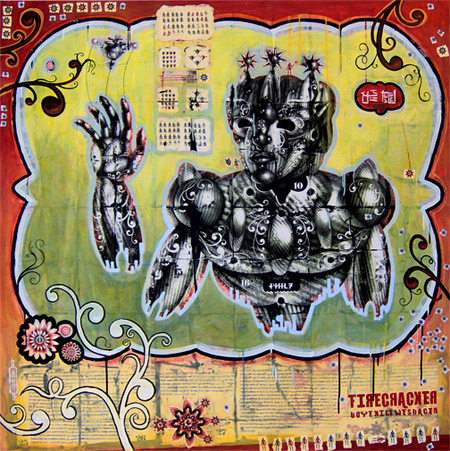 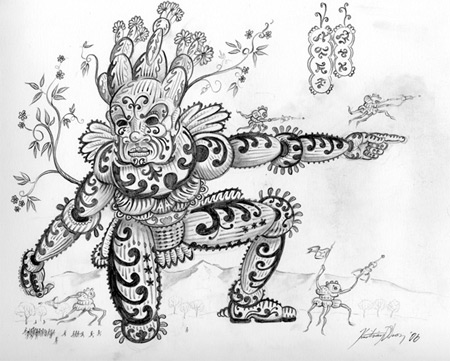 You can see more of Kristian Olson’s work at
www.kristianolson.com